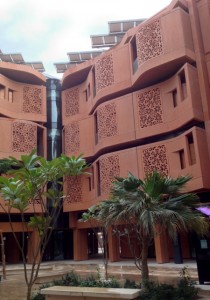 Ipsos MORI polled 18,000 people in 24 countries in 2013, and asked them, among other questions, which world city they wanted to visit. From the answers they drew up what they described as a list of “superbrand” cities.

In fourth place on the list, behind some very to be expected cities (London, Paris and New York) was Abu Dhabi.

“The world’s public don’t just think about America and Europe,” wrote Simon Atkinson, assistant chief executive of Ipsos MORI. “The United Arab Emirates may be home to the tiniest fraction of the world’s population, but punches far above its weight in terms of profile.”

I visited about the time of the survey. This is my choice of places and things to see and do.

Abu Dhabi, “Place of the gazelle”, is the perfect winter escape. With plenty of sand, sea, fast rides, waterslides and desert drives, the biggest of the emirates is now well established as a holiday destination in its own right. I paid a return visit and make a fresh choice of things to do.

The Corniche is an epic four mile long, show-off seaside promenade, with many green places to stop and picnic. Stroll it in an afternoon, or cycle it in less. Two high things catch the eye. The emirate’s flag, as big as a bus, atop a 360 feet pole. And the remarkable Capital Gates Building, with a built-in lean of 18°. (Pisa’s slant is only 4°.) The Avenue at Etihad Towers is a new mall dedicated to high-end fashion. Then turn in a few blocks to visit Qasr al Hosn fort, the oldest building in the city. As for eating out, the  choice nearby is colossal, from Ethiopian, via the many kitchens of the Middle East and Europe, to Iranian. As a bonus, visit the abundant, wildlife-rich mangrove swamps. They run kayak tours.

Yas Island, near the airport, is a frantic, red hot centre of adrenaline rides, high-speed action and entertainment. Sit back, cling on and watch your knuckles turn white. Waterworld opened this year (2013). It’s said to be the world’s biggest waterpark, with a dizzying choice of raft rides, tornado waterslides, terrifying ravines, wadi rides and endless sheet waves. Ferrari World is the first theme park dedicated to the illustrious red racing car. The stand out ride is the world’s fastest rollercoaster, Formula Rossa, touching 150mph. Abu Dhabi’s Formula 1 track is here. Feel free to run or cycle around it every Tuesday, for free. The Du Arena is the island’s other big feature, drawing such stars as Sting and Metallica recently. www.yasisland.ae

Shock of the new.

This prosperous oil-rich emirate’s latest bold plan is to bring some of the world’s greatest art to its new cultural district on Saadiyat Island, a 10 minute taxi ride from the city centre. Frank Gehry is repeating the gleaming silver sinuosity of his Guggenheim Museum Bilbao in the Guggenheim Abu Dhabi, due to open in 2014. The Louvre Abu Dhabi, showcasing loans from the Paris namesake and other French museums, follows in 2015. A permanent exhibition, the Saadiyat Island story, explains the vision. The shock of the new continues in the vast Sheikh Zayed Grand Mosque, open for (free) visits. There is room for 40,000 worshippers, the world’s largest carpet and largest chandelier. The columns are faced with marble panels inlaid with semi-precious stones.

Just an hour from the busy city, we peered over the razor-sharp crest of a 100 feet high sand dune, fresh-minted by the wind that morning. There’s a good choice of 4×4 tours into this pristine golden world, empty apart from the odd oil well and power pylon. Al Ain, the “Garden City” on account of its greenery, is the place to visit in the desert – as a day trip or for a longer stay. Evening, when the sun is down, is a good time to visit Al Ain Zoo. They are successfully breeding many threatened desert animals here. In Al Jahili Fort, there’s a permanent exhibition to the great British travel writer and explorer Wilfred Thesiger, who crossed the Empty Quarter in the 1930s.

Stay on the sands

We stayed in the five star Park Hyatt Abu Dhabi, on the beachfront on Saadiyat Island. It opened in 2011, and is one of Abu’s best seaside resorts, particularly attractive to the European winter holiday market. Our villa had its own private (heated) swimming pool, where we enjoyed that rare treat – a February pre-breakfast open air dip. We took the boardwalk to reach the beach, designed to keep visitors off the precious sand dune habitat where critically endangered hawksbill turtles lay their eggs. After cocktails in the Beach House bar, we dined in the Park Bar and Grill, offering an intriguing mix of Vietnamese starters, Australian beef and French wine. www.abudhabi.park.hyatt.com/

Abu Dhabi saves its most surprising attraction to last. Masdar City, next to the aiport, is worth a visit before you fly home. Cars aren’t allowed into this pioneer zero- carbon development (still only village-sized, but there’s much more to come) entirely powered by the sun, and the wind that blows hot and strong off the desert. We entered in a four seater driverless pod, running on guided rails. Buildings cram together over narrow, pedestrian-friendly alleys, mimicking ancient Arabian streets, down which cooling breezes blow. Students and researchers are working on the green technology that we could well see in towns and cities not too far in the future. Visits are free. http://masdarcity.ae/en/

I travelled with British Airways,  www.baholidays.com. British Airways offer three nights at the 5* Park Hyatt Abu Dhabi Hotel and Villas, from £669 per person.  Includes return BA flights from Heathrow and accommodation
with breakfast.  For reservations visit ba.com/abudhabi or  0844 493
0758