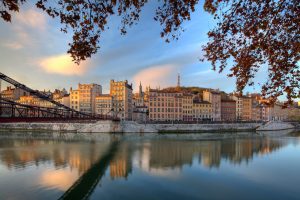 Photo – courtesy of Lyon Tourist Board

Lyon is a city for all seasons. An easy visit by train (five hours by direct Eurostar from London St Pancras in the summer) or plane, this UNESCO world heritage-listed destination offers fine old buildings, sensational shops and heavenly eating. And as the nights draw in, the lights go up (it is, after all, the birthplace of cinema) the city offers some memorable urban illuminations.

France’s second city is so convenient. The best of old Lyon –  from Roman amphitheatres to Florentine architecture commissioned by Italian bankers – crowds onto two hills and a peninsula between two rivers, crossed by 28 bridges. And there’s a visual checklist of the city’s history and famous people on  dozens of painted walls.

An impressive system – bus, tram, trolly and Metro  – serves the city. The Lyon City Card gives unlimited rides on the entire system, as well as funicular and river boat, with museum entry. That’s a real bargain as it includes the Fine Arts Museum, one of the biggest in France, and the new Museum of Confluences.

The slopes of Croix-Rousse district have become a hotspot for young creative types. There are vintage stores, second-hand clothes shops, contemporary and street art galleries, and cafés.

‘Presqu’île’, the peninsula, is the modern city centre, with cafés, restaurants, shops, department stores, banks and cultural institutions. Among the many picturesque streets are Rue Mercière. The Museum of Printing is in the former Hôtel de la Couronne. There are squares with fountains and churches throughout.

The vast Place Bellecour was created in the 17th and 18th centuries to honour Louis XIV. Today a statue of the Sun King on horseback dominates the square. Many hôtels particuliers, sumptuous urban residences built in the 15th and 16th centuries were built iin the area. The Hôtel du Gouverneur, built in 1730, houses the Musée des Tissus (Museum of Fabric). The Hôtel de Lacroix Laval is the Museum of Decorative Arts.

In 43 BC Munatius Plancus founded the colony of Lugdunum  on this hill. It became the capital of the Three Gauls. The archaeological park contains a large Roman theatre (15 BC), with room 10,000 spectators. Nearby is the 2nd century Odéon, intended for musical performances. There are well-preserved Roman roads lined with the remains of shops and imposing public and private buildings. Other features include the Gallo-Roman museum, Saint Mary’s chapel and the Notre Dame de Fourvière basilica.

Vieux-Lyon at the foot of the Fourvière hill, it is one of most extensive Renaissance neighbourhoods in Europe. Saint Jean Cathedral is a good example of Gothic architecture. The Manécanterie, next to the cathedral, is one of Lyon’s few surviving Romanesque buildings. Also in the Saint Jean district is the Museum of Miniatures and Film Sets, in the 15th century Golden Cross Inn.

The Saint Paul section has some fine hôtels particuliers,  built for Italian banker-merchants. Hôtel Bullioud and the Hôtel de Gadagne are two good examples. The renovated Gadagne houses the Lyon Historical Museum and the International Puppet Museum, opened in 2009.

A nework of 150 traboules join streets in the old quarters. These are corridors. along which silk yarn and bolts of cloth were carried, through buildings and their courtyards, from one street with another. Many traboules thread along the slopes of the Croix Rousse. One of the most impressive is Cour des Voraces, with its monumental staircase.

This museum of science, art and societies at the confluence of the rivers Rhône and Saône opened in 2014 to tell “the story of the earth itself from its earliest day’s through its history and geography”, and the “development, hopes and concerns of human societies from different times and different places”. It is divided between “Nuage” and “Cristal” zones, representing the “here and now” and the “what could be”.

The Fine Arts Museum, one of the biggest museums in France, with a range from Antiquity to Modern Art, also has the best collection of Impressionists after the Musée d’Orsay in Paris.

Other collections include the Fabric Museum, tracing 2000 years of the history of textile and silk weaving; and the tight-squeeze Museum of the Miniature.

The Museum of Cinema is in the hometown of the Lumière brothers, who invented the movie in Lyon. It is in the building where the first film was made, at the family house. The Museum of Printing is in the former Hôtel de la Couronne.

The Centre for the History of the French Resistance and Deportation re-opened in 2012, symbolically on the site where the Gestapo was based.

Lyon steps into retail overdrive in the commercial centre at Part-Dieu, an easy metro ride from the centre. For more sensitive shopping, stay on the central peninsula around Golden Square, with its flurry of snappy boutiques.

Rare among big cities, Lyon offers cruises on two rivers. Boats set off along the Saône, returning on the Rhône on the other side  (right) of the peninsula. Night cruises are best, when this city of illumination bathes its best bits in glorious light. They include the superb “upside down elephant” (Foutrviere Basilica), bridges, embankments and many squares and grand public buildings.

The Lyon National Opera is based in the middle of the city, in the Opera House (www.opera-lyon.com), an imposing city landmark with immense glass dome. This neo-classical building (1830) was refurbished in 1993 using just the original outside walls and the entrance hall, capped with a huge dome. There are regular jazz concerts. And look for free café jazz performances.

Is Lyon the world capital of gastronomy? It has a good case, with 18 Lyon restaurants awarded stars in the 2016 Michelin Guide.

The city’s most celebrated chef Paul Bocuse (who died at the start of 2018) has the single three-star restaurant. But he has also opened two rapid service restaurants, the Ouest Express in the Pathé Cinema multiplex in Vaise and in Part-Dieu commercial center. The two serve sandwiches, salads, vegetable soups, fresh fruit juices, pancakes, waffles, desserts and ice creams. In 2013 Bocuse opened the Marguerite Brasserie near the Institut Lumière.
The two two-star restaurants in the 2016 Michelin Guide are La Mère Brazier and Le Neuvième Art. There are 15 one-star restaurants in that guide.

The cheapest places to eat in Lyon are the bouchons, a type of small restaurant doing simple dishes brilliantly. They are the legacy of the women cooks who set up on their own when the grand families fell on hard times in the early 1900s. And if they are full, they book you in at another bouchon nearby.

From my visits to Lyon I recommend Le Café Epicerie de La Cour des Loges (part of a hotel made from Renaissance mansions). My saddle of lamb in fir tree honey – presented for inspection before cooking – must have recently gambolled on the elysian fields. My companion declared her John Dory in pistachio olive oil the best she had tasted.

Our best view while dining was at the hill-top Restaurant de Fourvière, gazing down on tree lined avenues snaking away. In the hazy distance, the vague outline of the Alps.

Bocuse is so significant here they renamed the market (when it was renovated in 2006, in the Part-Dieu neighborhood) “Halles de Lyon – Paul Bocuse”, in homage to the great chef, who regularly shopped there.
The many celebrated food stalls serving all sorts of regional products include the renowned Mère Richard (for cheeses).

The city has “trompe l’oeil” murals in every district: the “Mur des Canuts” – the silk-workers wall – in the Croix-Rousse, is one of the most spectacular.

Look too for Mur des Lyonnais – the Lyon people’s wall – and the Bibliothèque de la Cité (City Library) in the Presqu’île: www.cite-creation.com

The city launched one of Europe’s earliest bike hire schemes.