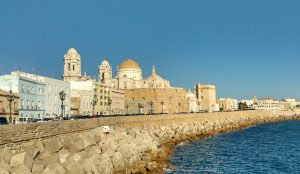 There are a few pieces of music so fused in the place for which they were commissioned than Joseph Haydn’s Seven Last Words. It was written for use in the Good Friday services at the Oratorio de la Santa Cueva, the Holy Cave, in Cádiz, SW Spain, in 1785. Visit this intimate little Baroque gem, where paintings by Goya shine out on the walls, and you’ll hear it playing on a continuous loop, throughout the year.

Haydn’s work was commissioned by Don José Sáenz de Santa María, who had reconditioned the Santa Cueva two years earlier. It was written for performance there as an orchestral work. A set of seven sonatas complemented the “Seven Last Words,” the statements which the Gospels attribute to Jesus when he was on the cross. One sonata would be played after a short meditation by the bishop, after each “word.”

Haydn was later asked by his publishers to make an arrangement for string quartet, his Opus 51, (which is the version generally played today) and another for piano.

The Seven Last Words, with its lyrical melodies, is one of Haydn’s most powerful and poignant compositions.

There is an appealing, and possibly apocryphal, story that Don José Sáenz paid Haydn with a cake filled with gold coins. But we don’t know the source of this tale.

If you visit Cádiz, there is another musical connection to experience, in Catedral Nueva, the city’s finest building, dominating the main square. The grave of Cádiz-born composer Manual de Falla, probably best known for his work El Amor Brujo and The Three Cornered Hat, is in a quiet corner of the crypt. Beneath the level of the nearby sea, this place is blissfully cool on a hot day,

Completed in 1838, the cathedral, in plain white marble, was part-funded by the city’s trading riches. The main feature in the nave, bathed in sunlight on our visit, is an astonishing silver monstrance, a massive box carried in solemn processions.

A longer piece by me on the Seven Last Words.

And my article on Cadiz