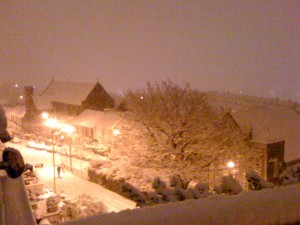 This Christmas season, 2015, Dylan Thomas’s “A Child’s Christmas in Wales” is being performed in two very appropriate places (as well as in many other venues in the English speaking world) – in Swansea, where Dylan was born in 1914, and New York, where he died in 1953.

The Swansea production, at the Dylan Thomas Centre, is by the Fluellen Theatre Company, with Delyth Jenkins on harp, performing their “celebrated adaptation” there for the sixth consecutive year. It takes place within walking distance of the streets and the park and snows and postmen that inspired the (un-named) boy’s fantasy recollection.

In New York City, the Irish Repertory Theater’s production at DR2 stars John Cullum as the narrator. Charlotte Moore is the director. And, seen through the filter of a six year old’s eyes, would a distantly-remembered New York be so different?

“On that legendary Snowy Christmas Day songs are sung, cakes are gobbled up, ghost stories are
whispered, and wild Indians roam the City Park; while the uncles, stuffed with pudding, nap and bellow on the parlor couch.”

In its review of the show, the New York Times describes Thomas’s work as a “cavalcade of imagery and sensation — the snowy sights, smells and sounds that marked the Christmases of his boyhood.” “This sweet and modest show conjures plenty of good will toward men.”

“A Child’s Christmas in Wales”, published posthumously in 1954, became Dylan’s most popular work in America. It has a secure place in the Christmas canon, alongside “It’s a Wonderful Life” and “The Snowman”.

As universal as the young boy’s memories might be, the title of the piece still contains Wales. And since 2008 it’s been possible to experience, in the original setting, that perfect slice of seasonal nostalgia (uncles and aunties not included). And, perhaps, even commune with the muse that inspired Dylan, one of the great 20th-century poets writing in English, despite his reputation as a liquor-fuelled hellraiser.

5 Cwmdonkin Drive, the solid, semi-detached house in the more genteel west of Swansea, stands on the famously steep “chilly, glinting hill”, up from the broad sweep of the bay, and the “carol singing sea”. It was restored to the home Dylan Thomas would have recognised in the 22 years he lived there. And now it’s possible to stay there.

This is one of those outwardly ordinary places that set your pulse racing. It is in this house that Dylan wrote roughly half his poems – “And death shall have no dominion” is the best know – and many short stories. By the time he left the family home in 1934, aged 20, he was one of the most exciting young poets writing in the English language. That make No 5 one of the prime addresses in C20th British, and you might argue world, literature.

Purists may argue that Thomas never lists the address of the boy’s house in A Child’s Christmas. Nor does he identify the child as himself. But Anne Haden, who restored the house with her husband Geoff, has no doubt that Dylan set the charming fantasy, first published in Harper’s Bazaar in 1945, in and around his own home. The clues in the story are compelling. (And maybe the meteorological hyperbole isn’t so excessive – there have been some severe Arctic weather recently – the photo is from December 2010.)

But the real emotional thunderbolt strikes in Dylan’s own cramped bedroom. He described it as so small he had to come out of it to turn around, and so cold he had to stand against the airing
cupboard for warmth.

The room has the only gas lamp in the house. And so, on December 25, some lucky person will be able to turn the gas down, snuggle into the single bed, say some words to the “close and holy darkness” and sleep.