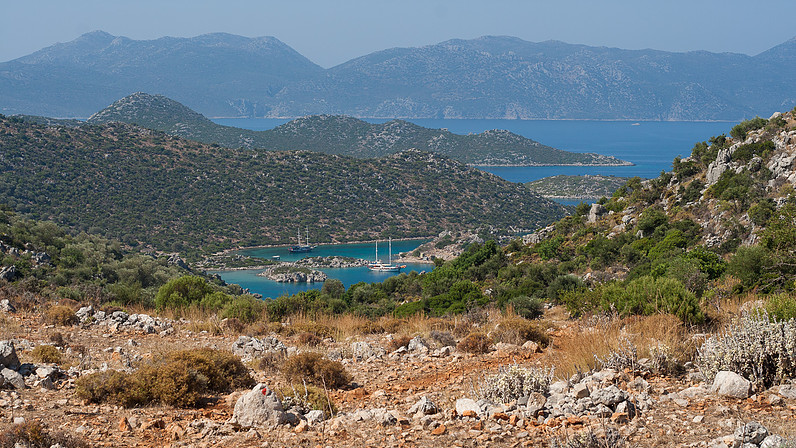 Most tourists in Turkey know of Ephasus and Troy. Yet there is a multitude of Greek and Roman sites around its south and west coast, many of them little visited with scarcely an explaining noticeboard. But this rich, unreported history is under threat, as the country’s tourist boom continues. One archaeologist wants to develop a new model, to conserve and enhance these remains, as part of a lighter touch tourism.

It’s a rare thrill to be in the company of an archaeologist when he discovers something new. Dr Asil Yaman had launched his drone over a spot on the coast of South West Turkey that we knew quite well. We were familiar with the scattered, somewhat battered, but significant sections of classical column, part-covered by centuries of accumulated soil. Intriguing, and unexplained. And not unusual in this landscape of randomly distributed remains.

We were on the bay opposite the village of Söğüt, an hour from the big resort of Marmaris. It is on the narrow Bozburun Peninsula, a six miles long offshoot on a coast of so many marvels of antiquity. There isn’t a single designated Roman or Ancient Greece site here, although we had long suspected there was more than had so far met the archaeologist’s eye.

Asil’s drone climbed higher into the hot blue sky. He studied his screen. This was a view few have had, apart from the rare helicopter or light aircraft. Asil knew at once. “It’s a temple,” he shouted excitedly. “I never knew about this. Nobody has written about it.”

It was a 2000 years old Hellenistic structure, hiding in plain sight. And Asil may have identified it only just in time. If he had swivelled the drone’s camera just a bit, the shot would have taken in a flotilla of holiday boats in the bay, tethered to jetties in front of a line of restaurants.

The waterside community is still a small-scale development in this quiet little inlet, nothing like the big tourist sites. But the building goes on, a steady drip feed of projects. Random holiday homes are popping up around a coastline which had barely changed over 2500 years. 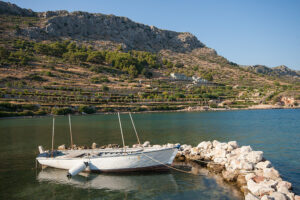 Turkey’s holiday boom began around 1990, in designated coastal resorts. Places like Söğüt were spared the crowds, who stayed in big package holiday hotels. There were no star attractions here, and few facilities. But in the 2000s visitors began to arrive by sea, in gulets and yachts. Those too big for the harbour would moor offshore, sumptuous and anonymous.  A few liked the solitude so much they built seaside villas, in one case on an ancient terraced slope overlooking the bay.

“It’s the biggest problem, development,” said Asil, director of the Phoenix Archaeological Project. “People are building houses everywhere. And they don’t care about the historical and cultural heritage. As an archaeologist I have a scientific purpose here. But more than that I want to protect the area. From people indifferent about its past.”

Asil, who is Turkish, works in the USA at Penn University Museum, Mediterranean Section. When we met him, in 2020, he was been staying in the village, devising a new model for small-scale tourism. Initially he wants to interpret little known sites to discerning visitors; then, more widely, to encourage tourists, local people and government officials to view places like the Bozburun Peninsula differently.

Turkey has many spectacular historical remains. The Greeks and Romans built cities and settlements all around the west and south coast. Places like Ephesus, Aphrodisias and Pergamon attract huge crowds in normal years. Troy, known around the world, endures only on a legend.

The Bozburun Peninsula, its coastline rugged and rocky, with many secondary peninsulas, bays and islets, lies between the Aegean and Mediterranean. The Datça Peninsula is to the north and the Greek island Symi is to the west.

More than 2000 years ago it was part of the Rhodian Peraea, administered from the island of Rhodes, which sits directly opposite it. Yet today once thriving settlements such as Bybassos, Hygassos, Kastabos, Tymnos, Syrna, Thysanos, Amos and Kasara are known only in academic papers, located by a few random stones and monuments above ground, some still bearing inscriptions. And even they have been neglected, and damaged.

One of the most promising of the largely unknown ancient sites is Phoenix, the principal settlement. “The name Phoenix comes from the near East, from the Levant,” said Asil. “So it is in the middle between East and West, between Constantinople and Egypt and Jerusalem”. 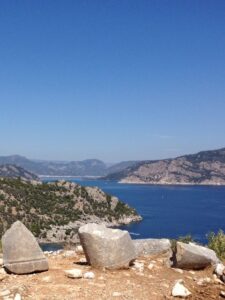 Any discerning tourist with suitable footwear for rough ground who is willing to head off into the heart of the peninsula, less than a mile wide in places, will find some notable marvels, and have them to themselves. The outstanding survivor is a small temple at Phoenix dedicated to Apollo, with an intact 2000 year old inscription, but no signboard to say what it is. We pointed out a section of massive wall nearby – Asil surmised that it dates from the Hellenistic period – and a section of ancient road smoothed by centuries of footsteps and cart traffic. They are not in any guidebook I know.

The narrow, bendy mountain roads leading from Marmaris have kept the big coach groups away from the peninsula. (The exception is Bozukkale Fortress, around the bay of Loryma, or Bozukkale, at the western extremity of the peninsula, just twenty Roman miles from Rhodes. It is easily reached by boat.)

Not that Asil plans to make this area just another day trip to pin to the package hotel “What to Do” boards. His challenge is to put together a case for presenting this little outthrust in Turkey’s bottom left hand corner, as a place to protect and appreciate.

But if he is able to find new things even as we walked around with him, it shows, he says, how urgent it is for more detailed study to be carried out on the peninsula. “There’s a lack of written down information. Places are under threat and people don’t know how important they are.”

Deciphering the peninsula’s history will require drone survey, some excavation and geophysical prospecting to understand the underground remains without digging. “Phoenix can give us many clues, not like Ephesus or Sardis, which are huge, where it takes 100 years to understand all the details. I picked Phoenix because its small size means we would be able to see many things in five years.”

This will be more than just an archaeological project, said Asil. He describes it as “multifaceted, multidisciplinary, multipurpose, social.” He is talking to colleagues in European universities, with a view to them joining him over the coming summers.

The Bozburun Peninsula is not designated for tourist development. Building is restricted to certain places, and on sites set back a certain distance from the sea. But that doesn’t stop developers trying. Some will be locals, who see profit in the piece of land where they used to graze their donkey; others are Turkish tourists who flock here each each summer and aspire to a more permanent base on this gilded coastline. Then there are the conspicuously rich, who creep have around these inshore waters every summer behind tinted windows in fabulous boats.

Asil believes development pressure will be irresistible. “If we don’t start to document this area, it will be gone very quickly. We know this story from the building in holidays areas like Kars, Bodrum and the Chesme Peninsula; the same would happen here unless this peninsula is given the protection that would flow from a designation that recognises its exceptional history, landscape and culture.

“We need to learn from the over-tourism that is blighting Venice and Amsterdam and Paris,” he says. “We can’t go on like that. We need a new model – something that adds value to tourism, much better than Jeep safaris and coach tours to Ephesus. It’s an ambitious project, which could promote a form of sensitive, small-scale tourism, treading lightly in the landscape, yet supporting local businesses, restaurants and accommodation. It is a little tried model, quite unlike the standard, major attractions such as Ephesus [swamped by] coach visits from the big tourist resorts, all car parks and queues and hustlers.

“This – small-scale, thinking, educational tourism, with local people having ownership – could be it.” It is vital, he believes, that villagers understand the value of the historical artefacts on the peninsula. “I want to tell everybody – you have very interesting sites. That’s the only way to protect the area.”

Writer Freya Stark visited Loryma in the 1950s and wrote the most lyrical description I’ve found of this quiet place.

“In the stillness of Loryma we spent the night. The wind could be heard howling outside, against the hills that enclosed our sheltered water as if it were a mountain tarn. Only a fanning ripple touched the centre. The sound of the wind, inarticulate and busy like the world’s voice, gave an illusion of safety, of an unassailable peace.

“If it could penetrate, how many sleeping echoes would it waken? Athenians from Samos, dodging the Dorian Cnidus, picking up ship’s tackle at Syme, sheltering at Loryma; Conon, before the battle, with his ninety ships; the Roman fleet that dared not face Hannibal in the offing; Cassius, gathering forces against Rhodes, twenty miles away. Each in their turn passed through the narrow opening and felt the sudden calm. In these places, the natural features have remained unaltered; the moments that visit them, fashioned to one pattern by nature itself, drop like beads on a string, through long pauses, one after the other, into the same silence.