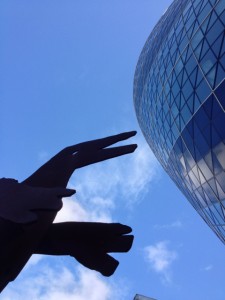 A dinosaur menaces the Gherkin in the City of London

It’s easy for visitors to see London as one great, sprawling, daunting destination, where they must fit in as much as they can, scurrying from the National Gallery, to the London Eye, on to St Paul’s, across to the V&A via the British Museum, before gratefully settling down to a show or a meal in the West End.

I have an alternative to frantic and exhausting dashing around. Target one distinct area of London and stick with it most of the day. There is enough to see in Greenwich, or the South bank, or South Kensington – or the West End – to keep any visitor busy and rewarded. But one destination is more self-contained and full of things to do than any other, to my mind. It’s the City of London.

The City, the “Square Mile” is a unique destination. Set on the river Thames, it is the very heart of the capital and the epicenter of our trade and commerce. It contains some of the most familiar buildings in the world, including St Paul’s Cathedral, Tower Bridge and the Bank of England.

It is rich, high and venerable, with an ancient system of government quite unlike – and far older than – any civic entity you could name.

You can enter it from so many different directions, and you may not be entirely sure when you cross its “border”. The traditional route to the City is on the top deck of an old number 15 Routemaster bus, complete with conductor. These doughty old vehicles still run along the Strand and Fleet Street from Trafalgar Square.

Or you could take the grand entry into the City, from the south, over the Millennium Bridge from the Tate Modern. There is a wide pedestrian way up Peter’s Hill, heading straight to St Pauls.

First, though, it’s worth a call to the architect-designed City of London Information Centre, shaped like a folded stainless steel envelope. Opened in 2007, it sits easily under its majestic neighbour, St Paul’s Cathedral just across the road.

I asked about the city’s striking new buildings, which were clearly visible. A member of staff identified them, the “Cheese Grater”, “Walkie-Talkie” and the “Gherkin”.

It’s an easy walk across the City. I like to stroll under the Fleet Arch, reassembled on this site next to St Paul’s in 2004 (it originally stood on Fleet Street), across the wide Paternoster Square, and back through the new shiny new shopping mall, One New Change with its floor-to ceiling glass panes in shades of red, grey and beige. There are superb views over St. Paul’s dome.

London is a very big story, and, rightly, it has a museum all to itself. There is a 450,000 year timeline to follow, and you can pick up the narrative at any point in the Museum of London.

I wandered into a room wallpapered with Charles Booth’s Victorian poverty maps, then moved on to an art deco lift from Selfridges, a glamorous symbol of the West End.

Among the temporary exhibitions is one unpicking the secrets of the suit. Another features the splendid and mysterious cache of gemstones found in 1912 under the floor in a house in Cheapside in the City. They were hidden just before the Fire of London. No one knows why.

For lunch I joined a queue in Leadenhall Market, under its fabulous, restored wrought iron and glass roof. This grand setting has passed for Budapest in Tinker, Tailor, Soldier, Spy, and as Diagon Alley in Harry Potter.

Once a meat, poultry and game market, it is now is a good place for superior takeaway sandwiches, salads and burgers for busy city people and tourists on the go.

I took my lunch to a seat outside 30 St Mary Axe, alias the Gherkin and looked up to see a 20 feet high steel dinosaur apparently about to take a bite out of the structure. This work by Jake and Dinos Chapman is part of Sculpture in the City, a powerful exhibition of modern street art. All around me were hefty pieces of sculpture, too solid to damage, and far too heavy to challenge any thief.

Not far away is the answer to one of the capital’s oldest archaeological questions. While the experts were sure they knew roughly where the Roman amphitheater was, they did not find it until the original walls were unearthed in 1988, during excavation for the new art gallery attached to the Guildhall.

In the ground level courtyard a line traces the shape of the former amphitheater. Two floors down there is plenty for your imagination to work with, around the exposed stonework. It is still one of London’s most atmospheric, yet little known remains (admission free).

3-D gladiators, frozen in midair, tumble and pounce, writhe and bend. Then see the rich art collection, which includes some powerful Pre-Raphaelites – Rossetti’s La Ghirlandata is one of the most striking. Another wall is dominated by the huge Defeat of the Floating Batteries at Gibraltar.

The Guildhall, built in 1411, is the beating heart of what is the second smallest city in Britain, after St David’s in Wales, at just 1.12 square miles. It’s worth visiting when the City of London Corporation is in session, to see the workings of a unique and remarkable government. There’s no party politics and everyone pulls together to do the business, which ranges from running Hampstead Heath and Burnham Beeches, to operating the Animal Reception Centre at Heathrow.

Meetings take place in the sumptuous Great Hall, a grand setting for glittering banquets in honour of visiting Heads of State and royalty, hosted by the Lord Mayor down the centuries. One of the trials held here was that of Lady Jane Grey in 1553.

To match its grand entrance, the City offers a tremendous exit. The most famous building in its control is Tower Bridge. The bridge offers what is probably the cheapest high view in central London. They take you up in a lift and give you a little film on how London’s north to south bank transport problem was solved. They explain the brilliant efficiency of this winning bascule design, and the simple miracle of raising and lowering it in less than a minute. The designers deserve a posthumous gong for services to tourism.

That high walkway is also the very best place to photograph the river Thames, in my view. Stand dead centre, and the river and both banks spread out below you as you’ve never seen them before.

Call the City of London information you need is here.