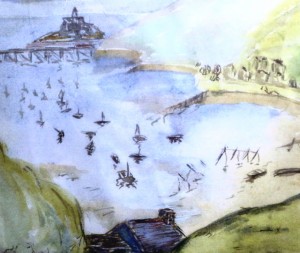 This is an and untold story about how  a young lady delivered a £5 note  to a hard-up poet in London.  That poet was Dylan Thomas. I don’t believe it has been told before.

A letter was sent to the editor of the Mail on Sunday for my attention by  the late Dodo MacKenzie, then living in Minorca,  in November 2007. It referred to an article I had written on Dylan Thomas for that newspaper. The letter was not published.  Dodo died in 2011

Until I read the article in your 11th of November issue, I thought I was the only person to know that Dylan and Caitlin Thomas once lived in the King’s Road, Chelsea!

During the war I used to spend a few days a year in Port Talbot, South Wales with a girlfriend called Hetty Owen who had as a lodger in her house, Arthur Thomas, Dylan’s uncle. Arthur worked on the railway. I was returning to London at the end of a visit when Arthur asked me if I would take a £5 note to give to his nephew  who, he thought, lived somewhere off the Kings Road in Chelsea. He explained that his nephew, Dylan, imagined himself as some sort of poet and seemingly had received an invitation from Pamela Hansford Johnson to recite the eulogy at 11 o’clock on the radio of the BBC. As it was a particularly cold spell, he wanted Dylan to buy himself an overcoat for the interview.

I asked for an extended lunch hour from the War Office where I worked and set off to find his “imagined poet”. Having heard he liked his drink, I thought a pub would be the best line of enquiry. I struck gold at the very first. The landlord took me around the back of the pub and there, leaning against the outside wall, was a very flimsy structure of glass and thin sheets of what looked like plywood. The door was  open so I tentatively walked in. Dylan was sitting at a rickety table drinking out of a tin mug. The floor of the lean-to was just hard pressed earth on which, in a corner, lay a mattress.

A door in the wall inside the lean-to led to a lavatory which served them as well as customers of the pub. I handed over the £5 note which Dylan just threw across the table. He then offered me a cup of tea explaining that Caitlin had just received £25 for a short story she had written and was out buying food. I remember that the stool I sat on to drink my tea had only two legs so I balanced myself by wrapping both my legs around the table leg.

A terrible rattling sound heralded Caitlin’s approach. She had both children sitting in a pushchair that had no rubber tyres. The sound of the metal wheel rims over the cobbled yard was deafening. I remember so well what she was wearing – brightly-coloured, striped, football socks pulled up over a pair of man’s baggy trousers, a sort of floppy cap pulled down to her ears and a man’s’s tweed jacket.

Soon after I made my farewells but not before something happened that I have regretted for the whole of my life. Stacked around the walls of the lean-to were daubs of Dylan’s paintings and for five shillings he offered me his self-portrait!!!! And I refused.

I wonder where it is today and how much it is worth? Ah well.