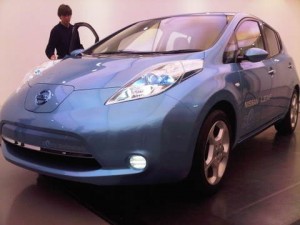 First day of spring, and the first all electric LEAF sprouts in a Hertfordshire car showroom

March 21, the first day of spring, and very appropriate for Britain’s “one small step, one giant leap” moment. Libya and Japan rightly dominate the news schedules, but in the longer perspective we will look back on today for the significance of keys handed over in a Hertfordshire car showroom.

Nissan today began deliveries of the first 100% electric, mass produced, “affordable” family car, the LEAF, to customers in the UK. The truth is, we really are entering new consumer territory. Electric vehicles (EV) were briefly tried once before, in the 1970s, before being brutally mugged by  Big Oil. (Who killed the Electric car?. See also  Revenge of the Electric Car).

Electric cars’ second coming has been marked so far by the very well-meaning but modest G-Wizz, and the rare and hugely expensive Tesla. The Nissan LEAF is the first conventional and potentially mass-market electric car to go on sale in Britain since the dawn of the automobile.

It isn’t cheap, at £24,000, and it owners may struggle to achieve the promised 100 mile range on a single charge. And in the short term it  will not make the slightest difference to the massive, and growing, output of CO2 by road traffic. Your chances of even spotting electric cars on the roads will be very low in the first year or two. They will be arriving at a  barely noticeable trickle, compared  to the flood of petrol and diesel-powered cars which the vast majority of us  will continue to buy and drive.

But it started today (Radio DJ Mark Goodier and electronics engineer Richard Todd were the first to take delivery of their LEAFs at Glyn Hopkin Nissan in Waltham Abbey, Hertfordshire),  and this time Big Oil, and, just as important,  Big Scepticism will not prevail over the electric car. Prices will come down, batteries will get better, range will extend  and the economics  of EV, if only as the second car in the household,  will become irresistible to many more people, quite apart from the green benefits.

Two years ago, before the Nissan Leaf was announced, EVs were  no more than a worthy concept. 12 months ago  there   were only a handful of proposed models. Now we’re  up to 12 or more serious electric cars  to be delivered to showrooms  by 2013, from  the genuinely  inexpensive, to  the ultra luxury. There are optimistic targets for EV penetration all round the world,  although it’s far too early to say if any of them   will be met. That’s all for the future. What matters today is the objections are falling away. Prices at the petrol pump  have become painfully high,  and electric suddenly makes sense.

Many people know they don’t  actually drive more than 100 miles in the average day, and  they drive still less in the second car, which  is what the EV is likely to be for some years to come. The “average  motorist”  will , and perhaps sooner than we think, come to realise that cars like the Nissan Leaf  perform very well, and  will be   won over by their clean and silent ways. There are much cheaper, and increasingly efficient conventional cars on the market, but the gap will reduce, and some years from now– perhaps five, maybe 10,  almost certainly 15, the case for electric cars, first made today  in the UK, will be irresistible.

I’ve since found this very well researched, and  extremely detailed  analysis of the Nissan Leaf,  and how green  (or not) it is. Click here