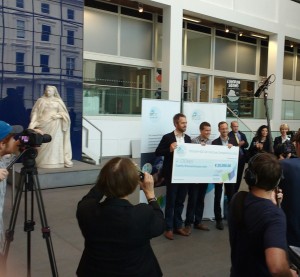 Director of Ooho!, one of Climate-KIC 2015 winners, accept prize at Imperial College

The big advances in slowing  climate change  will come from international agreements backed up with strong national government programmes.

But there will be technological fixes too, chipping away at that inexorably growing CO2 emissions figure, and providing cost and other efficiency savings at the same time. Taken together, the ones that turn into products and processes used in everyday life could make a significant contribution to slowing climate change.

The Europe-wide Climate-KIC Venture Competition, now in its fifth year, is one of the most important international initiatives to encourage developers and inventors in start-up companies coming out of our leading universities to put forward their business proposals, to win cash prizes and investment, or at the very least, wider exposure.

The 2015 event took place in the IMAX Theatre at the Science Museum in London on 9 September. Nine enterprises made their pitch. Each proposer was then quizzed by a panel of experts, who announced the winners a little later in nearby Imperial College.

Joint winners of the competition were Alchemie Technology and the intriguingly named Ooho!

Alchemie Technology.
The company was founded in 2014, offering “digital solutions for sustainable manufacturing”, bringing to market a more efficient and waste-reducing digital dispensing solution for selectively coating and patterning fabrics.
The process, based on a unique piezoneedle array, delivers a precisely defined fluid to the material with digital control. It offers significant reductions in the environmental footprint of the textile manufacturing industry.

Alchemie’s dispensing arrays can be integrated onto textile production lines to deliver materials only where they are needed, significantly reducing materials wastage and enabling more efficient drying times.

Ooho!
Ooho! is the company with the memorable name making edible water packaging, in a jellyfish -like blob of a biodegradable container, as an alternative to the plastic bottle. Far too few are recycled, and most of the cost of producing water comes from the bottle itself.

As much as one litre of water could be be contained in the glutinous eatable (if you wanted to) membrane. You consume the contents by biting it and sucking out the liquid. new form of container was inspired by the way nature manages to enclose liquids within membranes. The developers experimented with the long-established culinary technique of spherification, in which a liquid is shaped into little spheres that resemble caviar (Spanish chef Ferràn Adria applied it at his restaurant elBulli in the 1990s).

This new form of container was inspired by the way nature manages to enclose liquids within membranes. The developers experimented with the long-established culinary technique of spherification, in which a liquid is shaped into little spheres that resemble caviar (Spanish chef Ferràn Adria applied it at his restaurant elBulli in the 1990s).

They used different ingredients, proportions and dimensions, and found a way to create a gel made from a mixture of brown algae and calcium chloride. The final package is simple, cheap, tough, hygienic, biodegradable and even eatable water blob.

It comes in many different sizes, and in a double membrane. The second membrane keeps the inner one clean, and allows for a label to be inserted between the two layers without the need for adhesive. The strength of the membrane is “similar to the skin of a fruit” and it can be made thicker or thinner, depending on the use.

There were several more intriguing proposals, whose fortunes it is well worth following. They didn’t win, but these companies will continue to develop their products or processes.

The company is developing a handheld, disposable device connected to a smart phone, allowing researchers to analyse samples, such as groundwater or blood, anywhere for instant results, removing the need to transport samples back to laboratories. It would be a “gold standard laboratory for anyone, anywhere.

The device would be based on high performance liquid chromatography (HPLC). This is an analytical technique used extensively for agriculture and healthcare tests. However, due to its complexity and prohibitive cost, it is only found in centralised laboratories. Even then it can take weeks for test results to come back after a visit the doctor or the sending of a soil sample.
Delivering instant results from a handheld device, providing the power of the centralised laboratory at the doctor’s surgery or in the farmer’s field, would bring cost and environmental benefits.

This company developed a way to make “green” formaldehyde-free glue out of biomass (algae) for the large scale production of wood composites and wood panels for the world construction industry. The adhesives use fewer oil-based chemicals and the production process uses less energy.
It addresses growing environmental concerns and strict regulations on emissions of toxic chemicals. The wood composites industry is already developing environmentally-friendly alternative adhesives from renewable sources. However, these adhesives tend to to have poor water resistance and low strength properties. Cambond’s alternative was founded on its discovery that algal biomass has the required strong “sticky” properties. algae
Desolenator
The Desolenator is a portable device that purifies water from any source with the power of the sun alone. The company aims to provide water independence to 1 million people by 2020, using a technology that uses neither chemicals, filters or moving parts. It says the Desolenator is the cheapest and most environmentally friendly method of water desalination.
The Desolenator, equipped with a solar PV panel, is designed to harvest and use both the electrical energy created on the panel and the heat energy (the energy received by the average panel which is not turned into power). Inside the insulated Desolenator, the energy is used to produce inexpensive clean drinking water.

This company describes itself as a “carbon-tilted index provider”, providing a mechanism to link companies’ prices to their greenhouse gas emissions. It is currently the only body in the world drawing up a set of public Carbon Rankings to score the world’s largest listed companies. The rankings are designed to reward lower emissions and encourage greater transparency.

ET Index’s business plan is to develop and commercialise a series of stock market indexes based on the rankings, designed to shift capital away from the most polluting companies, towards the more efficient ones. If a sufficiently large pool of investors adopted them, these indexes would offer the ability to shift demand for companies shares, and therefore influence share price, reflecting companies’ CO2 emissions.

H2GO Power
The company’s product is a hydrogen storage solution, offering “safe portable power”. It has developed an answer to the problem that has been stalling the development of the hydrogen economy – storage. H2GO has , with a safe method to store hydrogen to provide power on the go. It uses a novel “sponge-like” material that catalytically produces and stores hydrogen gas at room temperature. The hydrogen produced can then be fed into a portable fuel cell which converts hydrogen’s chemical energy into electrical power suitable for anything from a mobile phone to an electric car.
Nafici Environmental Research.

Nafici makes pulp from wheat straw, not trees. It is a small-scale technology, using agricultural waste to produce pulp as a competitive alternative to hardwood pulp, for use in paper manufacturing and for other applications.

Nafici intends to license the know-how and develop the technology in the UK and overseas, focusing on countries with a large cereal crop production, where there are large quantities of straw as a by-product.

The company is based on the simple principle that people will be paid for not using energy. The National Grid already applies it, by paying large energy users to reduce their demand at peak periods, when the stressed system is running close to full capacity. This lowers the risk of blackouts, increasing the cost of electricity and driving up our use of dirty, carbon-emitting energy generation.

Upside aims to open this market up to households and small businesses, who would store backup power in batteries. They would be paid to reduce the amount of energy they take from the grid at peak time, using their batteries instead. A cloud service would coordinate the charge and discharge cycles of the batteries. Consumers pay less for their energy, CO2 emissions are reduced and the grid runs more reliably and efficiently.