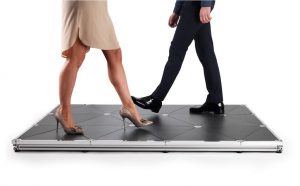 In 2015 renewable energy start-up Pavegen broke its crowd-fiunding target and was able to fund expansion and product development.

Pavegen’s latest development in its renewable energy-generating technology (announced on May 11, 2016) is a triangular tile, the V3, said to be far more efficient than the company’s previous models, generating 5 watts per step. It can be used to power low-voltage off-grid applications such as street lights.

As people walk on the floor, the weight of their footsteps makes a flywheel underneath the tile rotate, converting the downward force of a footstep into electricity. The flywheel turns at 1500 RPMs, compared to 80 RPMs in the company’s first floor tile, generating almost 200 times more energy than the first version, which it made in in 2009.

The new device has a generator at each corner, which optimises energy capture. In Pavegen’s earlier versions of the tile, which were square, pedestrians had to hit a (hidden) hotspot in the centre, where the flywheel was. Stepping on the edges meant no power generated. The new tile eliminates those dead-spots.

“It means not a step is wasted,” said Pavegen CEO and founder Laurence Kemball-Cook.

The company has not released a price, but the new tiles, which it says are durable and simple to fit, would be sold for “around” the price of good quality flooring you might see in a train station. Any extra cost should be offset by savings in electricity and sustainability benefits

One of the first installations will be at the Westfield shopping centre in Stratford, east London. After that the tiles will be taken to Dupont Circle in Washington, DC, and just off London’s Oxford Street (Bird Street).

There Pavegen tiles will be installed in the traffic-free space, supplementing the energy generated by solar panels on roofs and bicycle shelter canopies along the street.

TfL is in partnership with the New West End Company in a project to power 25 streets in London renewably. The plan is to make Bird Street an ‘intelligent street’ that can generate its own renewable electricity from solar and kinetic energy technology.

Pedestrians could generate energy for the street simply by walking on it. A typical light requires 60W in an hour, so one bulb could be powered for an hour with around nine footsteps. Footsteps alone could generate sufficient energy to meet the energy needs of the street. Energy could also be stored in a lithium polymer battery for later use.

One of the applications of the new technology is data capture. Pavegen and partner Tribal Planet announced (May 2016) they would be creating a digital application, to be deployed in public places around the world to monitor the energy generated on each Pavegen tile.

Founded in 2009 by Laurence Kemball-Cook, Pavegen has grown from a 5-man team to a 40-strong group of engineers, designers, and innovators around the world. One was to install tiles on a football pitch in Nigeria to generate electricity when players step on them to provide some of the energy to floodlight the pitch.

Pavegen and partner Tribal Planet announced they would be creating a digital application, to be deployed in public places around the world to monitor the energy generated on each Pavegen tile.

Data might be used by companies to track footfall to see how popular various locations are. Or they could use apps to offer discounts to opted-in consumers.

Pavegen’s CEO Kemball-Cook described the May 11 launch as: “The biggest moment in Pavegen’s history. We’ve created a product that can reshape the way people move in our cities.”