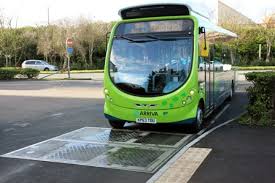 The latest easyJet magazine extols Milton Keynes. It is certainly a city of energy and achievement, and it deserves to be recognised as a pleasant place to live and work, just 30 minutes by fast train to London, even if it doesn’t have many interesting conventional tourism features.

It is in a good central position in England, on the main West Coast Main Line between London and Scotland, close to the M1 and M40. It will soon be linked by direct trains to Oxford and the West, and a little later by a restored line to the East, to Cambridge. This will recreate the “Varsity Line”, which made Bletchley Park the ideal site for the wartime code breaking centre, midway between Oxford and Cambridge. It is now now a magnificent museum in the city, telling the story of the computer and wartime codebreakers who worked here in such secrecy.

I know Milton Keynes well. It’s just 15 miles from where I live, and is our natural second choice after London for shopping, restaurants and entertainment all together in one place.

The city can rightly take credit for various green initiatives. It’s been running an experimental electric bus since 2014. The vehicle charges at the end of its route from a panel in the road. Milton Keynes was one of the first cities to introduce electric car charging points in its car parks. There aren’t many electric cars yet, but the number is beginning to build.

And in 2015 it begins trials for autonomous, driverless cars, in a joint project with Coventry in the UK Autodrive programme. It will test both self-drive cars on the road and self-driving pods designed for pedestrianised areas. The project includes developing the technologies that will need to be built into roads and the surrounding infrastructure to aid vehicle navigation.
But the easyJet magazine makes one claim with which I must disagree. According to the writer, “sustainable transport is a key feature” in the city. Anyone who visits Milton Keynes and who knows the comprehensive public transport in the standard European city, from Rotterdam to Zürich, Bordeaux to Dijon, will find this puzzling.

Let’s start with the railway station. it would have made far more sense to build the original city heart – with its massive shopping centre which the article describes as the fourth biggest in Europe – directly over and around the main station on the West Coast main line. Instead it is uphill, about a mile away, or a 10 minute brisk walk for a long fit person. Most visitors will take a bus.

There are regular buses everywhere, but apart from those excellent, and still limited in their reach, electric buses, they’re not particularly new, and it’s quite hard for the novice to see where they go. Crucially, there is no tram, unlike the majority of major, and minor, European cities. A tram of the quality of, say, Basel in Switzerland and even such a small city as Angers in France would be an immense boost to travel around the centre of the city.

The simple truth is that Milton Keynes is essentially a new city designed for the car – and the decision to make it so goes back to the city’s origins in the 1950s. The roads are set out on the grid system, but unlike the pattern in the USA, many intersections are roundabouts, without traffic lights. These are some of the most difficult roundabouts I know in a built-up area. They are big, and busy, and fast, and a bit intimidating. There are very few rapid transit systems in cities and towns in the UK. Since the widespread closure of tram systems in the 50s and 60s, very few have been replaced – Nottingham and Manchester are two of the best examples. The new Edinburgh trams seems to be working well, but attracted enormous negative publicity before completion because of the cost of the project and the way it was handled.

Milton Keynes, by rights, ought to have had a tram system designed into its fabric when the city was launched. It wasn’t, the car prevailed, and it’s hard to see where the money would come from today to install a tram, even in a city which has the space on its many wide roadways to accommodate one.

Visit Milton Keynes, for its abundant shopping, Snow Dome, and its
theatre and gallery. But accept that its public transport is modest indeed compared to the magnificent integrated systems across the European mainland. Bring a car. You will need it.