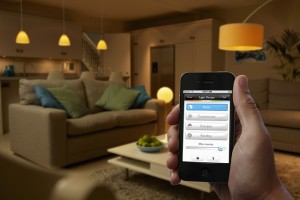 Cue the Hue: making light work, via a smart phone.

Apple stores are some of the most enticing retail outlets in the High Street and shopping mall. They sell what is surely the world’s most seductive range of technological items affordable by the general public.

You may just like to wander in for the cheerful white light buzz, or for the infectious enthusiasm of so many young, roving staff in blue sweaters who can sell you things with remote devices without ever going to a till.

And what do they sell? Why, those world beating Apple products, of course. Computers, iPhones, iPads, iPods and all those other essential i-prefixed items, comparatively expensive but tantalizingly within the price range of many.

Apple stores also sell ancillary equipment, such as bags and headphones, but they play mere supporting, non-speaking roles in the bigger Apple production.

That’s been the rule until now. It’s remarkable. Apple seem to have just broken it. Last week I came across one particularly attractive and well designed piece of merchandise on its shelves, a very glossy box containing three lightbulbs.

Light bulbs? That’s mad. Yet think about it. Apple is only the most successful retailer in the world, and it must have a good reason to sell lightbulbs.

I think it does. These are like no bulbs you’ve ever seen. The Philips Hue can do so many things, as well as straightforwardly illuminating you, that it could represent the biggest revolution in lighting since Thomas Edison invented the original incandescent light bulb itself.

The Hue box contains three computer-controlled LED lightbulbs and an electronic “bridge” that connects to the Wi-Fi router in the home. Most people who see the price, £179.95, might still consider this a nonsensical amount to pay for some lights.

They will find the price differential between this and some very attractive, and very much cheaper LED lights, around £10, to be too much, (as I’ve written, earlier).

That differential can’t even be compared to the price difference between, say, the Apple MacBook Pro and an ordinary PC delivering the same performance. With computers, people are still prepared to pay the extra because the MacBook is so elegant and well designed and reliable. (I speak as one who had a PC for years and would now never give up his MacBook.) So why should they pay an extra £100 for lightbulbs?

I don’t think the Apple accountants have made a big mistake in finding room on their shelves for such a high cost, prestige “object of desire” item, however. I think we are at the start of what now seems to me an unstoppable revolution in really useful, and affordable technology.

Look at what technology has done from us in home so far. For some time we’ve had gaming machines that take the user into the most fabulously complicated virtual worlds. We have TVs that can deliver just about any show, or set of moving images from anywhere, and on demand, and with the most intensely clear picture. And yet apart from entertaining us, helping us learn, keeping us endlessly in touch and giving us the facility to effortlessly make restaurant bookings, buy loads of stuff on Amazon and check the test score, this fabulous gadgetry doesn’t do a great deal that is positively useful around the house.

Such as switching the lights off and on…when you’re 10,000 miles away. Consider. You are on a beach in Hawaii. You are concerned about the security of your home. You have lights on timers, but burglars know all about that. So you go to the iOS or Android app on your phone, and over the next 20 minutes or so, you turn the Hue lights on and off in your home, giving the suggestion that you or somebody is there.

Wait. There’s been an update. The app can do that random turning off and on for you, already. Just set the alarm to “randomize” and the lights will turn on at slightly different times while you’re on holiday.

That’s a mere party trick. The Hue can do much more. Its lights can be turned to any colour of the rainbow. You can choose from a color palette or reproduce colours of your choice from photos.

As Philips explains on its website, the timer function lets Hue lights flash blue when your TV show is about to start, or even shine bright pink to let you know when the cupcakes are ready. “It’s also great for telling the kids that playtime is up and it’s time for bed. It’s so much cooler if Hue tells them it’s bath time than when daddy does!”

Philips preloads four “LightRecipes” – relax, read, concentrate, and energize – which adjust lighting to specific shades and brightness levels based on research into how those scenarios affect the human body. So you could have bright lights when the children are doing homework, and a softer setting for evening relaxation time. You can set lights to slowly brighten in the morning. And now the lights can be made to turn on when you approach the house, and to turn off automatically when you’re leaving.

The system, controlled through your domestic Wi-Fi router, can support at least 50 lights (although extra ones cost a daunting £50 each). It’s not hard to imagine a programmer setting the Hue to run a light show such as the one delivered by the spaceship at the end of Close Encounters of the Third Kind.

I haven’t made much of the energy (and CO2) saving from the 5 watt Hue bulb, because there are much cheaper LEDs that can give you those serious economies. But as a fully fledged LED – 600 lumens, or about the same light as a 50-watt halogen, consuming about 8.5 watts – the Hue does use very little electricity. And because you can control it from anywhere, you should be able to make more savings over a standard LED, by only having it on when it’s needed.

Expensive? Certainly. An unnecessary luxury? No question. Not for too long, though. Look again in five or 10 years time. The Hue, and the imitators, will be cheaper, they will be doing even more, and at a much lower price. And we’ll all want them.