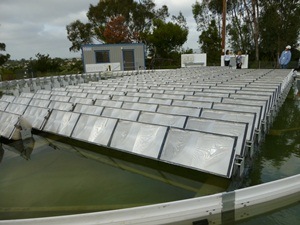 Solar has been making  steady progress over the past few years. In some countries  its costs are coming close to parity with  those of energy produced from conventional sources.

But until now the breakthrough that would propel it from a miniscule share of the world’s energy generation to a big player has  proved elusive.

Could siting installations of solar panels on water, where they could easily (and using little energy) be moved to catch the sun be the game changer renewable energy proponents have been waiting for?

It’s  another of those, on the face of it, very promising ideas being thrown up by small, questing companies and researchers.  Many will fail: will US company Pyron Solar be any different?

Pyron is testing a 20 kW installation  of solar panels in San Diego  which it hopes will generate electricity at higher efficiencies and lower costs than conventional flat-panel photovoltaic systems.

The panels sit  on  a body of water the size of a large  swimming pool. A small 12 vote electric motor moves them around  easily to  follow the sun.  Water is used as a passive coolant to disperse the heat generated by the photovoltaic cells to prevent overheating of critical system components, and for increased efficiency.

Pyron President Stephanie Rosenthal  told Jim Motavalli  of the New York Times the  installations would be suitable for calm rivers, ponds and man-made pools.  They  might also be put on reservoirs , or areas of wastewater, or even in the water hazards on golf courses.   The panels, kept cool on hot days by the water, can be mounted low to the ground,  so they don’t shade each other and can withstand high winds that could topple a tall solar tower, on a  a very small “footprint”.  The estimate is that a system on three acres could produce a megawatt of solar power.

Pyron uses an acrylic concentrating lens, which concentrate the sun’s rays on a small optical device, which then spreads the sunlight evenly over photovoltaic cells to generate electricity.

According to Pyron, the new technology has the potential to cut solar power costs by more than half, as compared with typical commercial rooftop flat-panel photovoltaic systems. The savings are due, in part, to the use of the concentrating optical devices, rather than more expensive semi-conductor material.