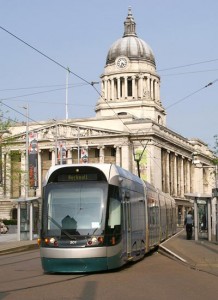 Boris Johnson may have built a great big snowman of denial on the Department of Climate Change’s lawn, but the fact remains: the overwhelming consensus among scientists is that Global Warming is real, and we need to act.

Where, though, is that action going to come from?   It must come from government clearly, as it’s their responsibility – the Climate Change Act commits the UK to 80% emission reductions by 2050, and 60% by 2030.

From the private sector, too, not least because there’s a clear market for green goods and processes. Then there’s another sector, whose powers in this area are often overlooked.

The government has come up with a policy, called City Deals. Those chosen  authorities, as they look for sustainable growth, will be allowed to borrow to build infrastructure on the strength of increases in the business rate, and to lever in additional private finance. They may also be able to set lower business rates for, for example, clean tech companies.

Action to deliver the carbon plan could, and should in the opinion of the Green Alliance think tank in a new report, come through these additional powers, and devolved funding the government intends to give the 26 or so cities and areas in the first two waves of the programme. The extra powers come in exchange for a commitment to stronger governance arrangements. “City deals could be game changers, by enabling cities to deliver high quality, vibrant, sustainable and resilient low carbon growth,” notes the Green Alliance.

The Alliance report analysed the low-carbon credentials of the “Wave 1” city deals, announced last summer, and prospects for

“Wave 2” cities, to be announced in March 2013, to deliver low carbon economic growth.

The Government’s national plan for growth includes targets to increase investment in low carbon technologies. And the report shows that almost all of the cities involved, Birmingham, Liverpool, Newcastle, Leeds, Nottingham, Bristol, Manchester and Sheffield mention low carbon activities in their prospectuses.

However not so many cities have managed to integrate the low carbon philosophy into their plans and link it with their existing climate change strategies.

The report suggests cities such as Bristol, Liverpool and Manchester, with their existing ambitious energy/climate change/green economy strategies,  are missing opportunities to use the city deals to progress these agendas.

One positive example singled out in the report is Nottingham, where low carbon growth is embedded in the proposed Creative Quarter . The new quarter will include district heating and  transport investments. These initiatives are closely linked to the city’s energy strategy and sustainability objectives, notes of the report.

The Green Alliance believes that the way cities in the original two waves meet, or fail to meet, the challenge could be relevant to other towns, districts and regions that may benefit from an expanded City Deal process in the near future. While smaller cities may not have the low carbon manufacturing advantage of Liverpool or Newcastle, it notes that retrofitting buildings to make them more energy efficient, green skills and sustainable transport provide significant opportunities in almost every area of the UK.

The LGA has already backed an expansion of the concept. “We see absolutely no reason why City Deals should not be offered to all eligible areas that want one.” And Deputy Prime Minister Nick Clegg seems inclined to listen.