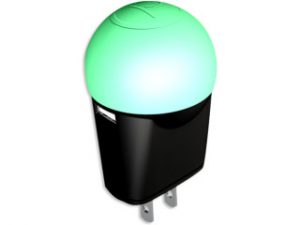 I remember the question, in the distant technological past, in a Carphone Warehouse outlet on the Marylebone Road in London. I was picking up my first, clunky mobile phone.

“And is it possible to overcharge the phone?” asked a customer alongside me.

The assistant gave him some unscientific reassurance. No, he wasn’t to worry. And that answer has lodged in my mind as a comforting “fact” about mobile phones ever since.

I’ve never bothered to check it, despite having recharged my phones and other electronic devices many thousands of times since that day.

Today, 20 years on, I discover that, according to the makers of BrightCharger, a new “smart” charger for mobile phones and other devices, you can, indeed, overcharge your phone. This device promises to prevent you from doing that.

It appears that a 90% charge is sufficient. The charge level decreases more rapidly when higher than 90% or lower than 10%, says BrightCharger. “As smartphone users may have noticed, charge levels may decrease by up to 5% within minutes of unplugging a fully-charged phone from a charger,” the company notes on its website.

Yes, I’ve noticed that, but never wondered why it happened, or what it is doing to my electricity bill.

The standard charger, it seems, is constantly trying to replenish that lost 5 or 10%, and unnecessarily using power by doing so, whereas BrightCharger switches itself off as soon as the battery is optimally-charged. Which could mean less than 100%. (Some devices apparently have an intelligent charging mechanism built in, and will automatically stop charging when their batteries are full.)

The Finnish company behind BrightCharger, which launched in 2015, claims that continually topping up a device’s battery can pose a fire risk, and harm the lifespan of batteries, in exchange for minimal boost in charge. And energy is wasted, too, when chargers are “live” – plugged into an outlet, but not attached to a phone.

BrightCharger is a straightforward and simple device that only does three things. Plug in your phone, or any device that uses a USB charger, and touch the light to begin charging.

The LED turns green to show that it is delivering your device a charge.

When it’s reached the optimum level of charge, it switches off and the light turns white. And that’s it. So if, for example, you are charging your phone overnight, there is no risk of overcharging it.

According to BrightCharger, there are three types of electricity consumption:

BrightCharger’s philosophy is to minimise type 1 and type 3 consumption. “These types of electricity consumption are not beneficial to anyone.”

It doesn’t try to estimate how much energy is used on the estimated 10 billion devices (2017 figures) currently in use in the world, but there is clearly a lot of power wastage. “We think that saving even a single watt of electricity is good for both the wallet and the environment.” BrightCharger claims the lifespan of batteries will be longer, but I could find no technical support for this online or in the release I read.

When it is not charging, BrightCharger can be used as an LED nightlight, using, so the company claims, “very close to zero” power. And nightlight mode can be disabled.

The company launched a crowdfunding campaign on Indiegogo this month (May, 2017), and investors in this “socially responsible” product are able to please early orders. In September mass production begins. In October the first BrightChargers will be shipped to backers.

This clearly isn’t a business operating out of the Helsinki garage. “The original idea came from my personal frustration with the overcharging issues of current chargers,” BrightCharger CTO and inventor Harri Tiainen says in a release.

“I developed the original concept from scratch then decided to form a team around the invention, [with] technical, commercial, PR and international experience. [They have] invested their own time and money to ramp up the business over the past two years.”

Backers on Indiegogo making the basic $33 stake will get the device (“the Rolls Royce of chargers”, RRP $49) before everyone else. (For the moment users in the UK and other countries using three-point plugs will need an adapter to accept the standard two point European and US fitting.)

The market will decide soon enough, but at first glance (online) it looks like an interesting prospect, with you and everybody you know as potential users.