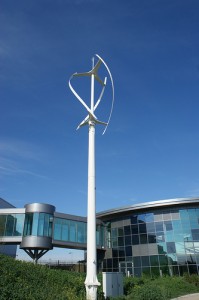 The more we accept the need for renewable energy, the more we seem to have it in for wind turbines. They creak and groan and, many say, blight fine landscape. They kill birds, it is alleged. They are just too big and intimidating for the virtuous life.

Yet we know we would be mad not to use wind.  So could a radically new all-British cylindrical turbine quite unlike the two blade variety in its looks and technology, give this vital energy source a fresh spin? Is the Quietrevolution QR5 wind’s iPad?

So far, since it launched in 2008, the company has hardly spun its way into popular consciousness. But we could soon be saying many more of the 14 m tall, elegant triple helix turbines. This month (February, 2011) Quietrevolution signed a financing deal to enable it to more than double the number of wind turbines it produces for the UK market.

Cleantech investment manager Hazel Capital agreed to give  £5 million in funds to the wind turbine manufacturer. That will be enough for it to install at least 150 more of its QR5 vertical axis turbines across the UK. (120 QR5s are said to have been sold in the UK.) Hazel takes on the financial risk once the turbines are built, leaving Quietrevolution to concentrate on manufacturing.
If the traditional two blade turbine is, for the foreseeable future, likely to be consigned by public opinion mainly to distant hillsides, or far out to sea, the QR5 is intended to operate, without giving visual or auditory offence, literally in our back yards. Indeed it actually works best among the gusts and eddies of the complex urban landscape, catching the wind as it blows from any direction, unlike the traditional turbine, which has to turn to take the wind.

Some part of the surface area of the three, tapered S-shaped carbon fibre and epoxy resin blades, which spiral round a central mast, is always facing whatever airflow is available. So in an urban setting it doesn’t really matter if a turbulent and gusty wind suddenly changes direction, as another part of another blade will always pick it up. Conventional turbines can struggle in unpredictable winds because they must turn to track the gusts.

Depending on wind speed, the QR5 could generate 10,000kW hours a year — enough to power the lights, computers, phones, faxes, printers and servers of a twenty person office, or provide the electrical energy requirement of around five energy efficient homes.

Quietrevolution claims further benefits. Because the structure is smaller and more compact than traditional turbines – 5 metres tall, and about 3 m across on a 9m mast, not much bigger than some old-style TV aerials – it is less intrusive,  and easier to integrate into existing and new building designs. And it is claimed to be very quiet and vibration free – a critical factor if QR5 is fitted on buildings.

What gave QR5 an initial push was the fact that some of first customers were not the already committed eco-warriors, nor even the usual green-minded celebrities, but some of the biggest supermarket chains, who wanted to use clusters of the conspicuously spinning turbines to make a public statement of their ecological intent, and have big budgets for more if they like what they see.

In late 2010 Quietrevolution, named the fourth fastest growing cleantech company in Europe in the Cleantech Connect League Table Awards, announced it had struck a deal with European energy company RWE Innogy to sell up to 100 turbines in the German market.