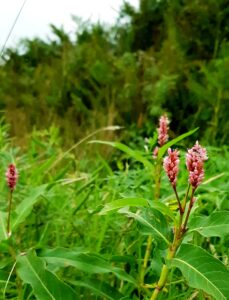 How we found one of Monet’s flowers using a mobile phone plant identification app.

In 1894 the artist Claude Monet ordered a selection of plants from his new friend Joseph Bory Latour-Marliac, who had recently exhibited plants from his nursery at the World’s Fair in Paris in 1889.

One of them, unsurprisingly, was the water lily, newly hybridized by Latour-Marliac. (At the time the only hardy water lily in Europe was a white one; he made a palette ranging from delicate yellow to fuscia and deep red.) But the very first plants on the 1894 order of 30 species he made were “3 Polygonum Amphibium (Water Smartweed)”.

Monet was creating his water garden, jardin d’eau, at Giverny, and the pink hue of the smart weed appealed to him.

The waterlilies Monet purchased went on to become some of the most famous floral subjects, in his series of paintings Les Nymphéas. However I haven’t found any reference to the water smart weed in the catalogue of his paintings. 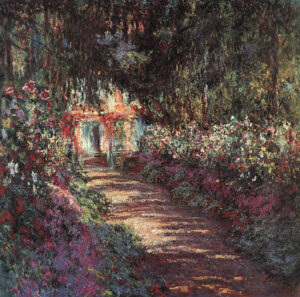 I came across this random congregation of the plant, growing alongside a hedge close to Kenfig Pool in Glamorganshire in South Wales this week. They probably spread up from the pool, which is part of a national nature reserve, rich in wildlife. The plant is described as common, although I’ve never knowingly seen it before. It’s rare to me, and an exciting discovery, thanks to the plant identity app on our phone. Considering its place, albeit a minor one, in the history of art, it was a delight to see it. Long may it flourish in this quiet corner of South Wales.