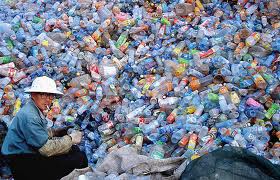 How many trips before this tip? Plastic bottles for recycling in China.

Ordinary voters rarely get the opportunity to vote for change.  Lifestyle-altering decisions such as the ban on smoking across the UK, and the compulsory charge for plastic bags in Wales (October 2011) are taken by governments without reference to the electorate.

The best we can do is to vote for a party with a radical mandate to take bold decisions on, say, the environment, and hope it gets in. Even then it’s a very uncertain route between our vote in the ballot box and a decision a year or so on to legislate to, for example, save the skylark or charge for using the M1.

So it is very unusual to come across a body of people voting, very decisively, for radical green action, and for that decision to be caried into action within a month.

This March (2012) students at the University of Sheffield voted overwhelmingly to ban sales of bottled water in shops and catering outlets around the students’ union. People would be encouraged to use water fountains and re-useable water bottles. The campaign was driven by Freeasy , a team of 10 student volunteers “pursuing the social change of drinking tap water instead of buying bottled water.”

This in itself is a gesture akin to firing a peashooter at a Centurion tank. The bottled water industry is rather big, with the latest estimate from http://MarketResearch.com that it will grow, worldwide, to $125 billion by 2015. Could the multinational companies that run this uncomplicated and profitable industry care less about Sheffield University?

When first heard this, I thought it was a gallant, but a token, gesture. I’m not so sure now. I did a quick Internet check and discovered that 90 different colleges and universities in the USA (where the industry is worth $22 billion) have taken a similar vote to ban the sale or restrict the use of plastic water bottles. They include Brown University and Harvard University. The University of Vermont is the latest to join the movement (see this report in Bloomberg). Students are being given water containers when they register and may fill them up for nothing at filtered water points on campus.

This rejection of bottled water was big enough to draw a condescending putdown from the manufacturers – more than 9 billion gallons of bottled water were sold in the U.S. last year, and the industry is growing there at 5.4 percent annually. A spokesman said: “There are really serious issues over here, and now you’re dealing with bottled water?” (My italics.) The industry says bottled water is a safe, convenient product that is “one of the healthiest drinks on the shelf” and that its packaging is recyclable.

Like most people, I drink bottled water. I drink it when it is put in front of me on planes and trains and, reluctantly, in restaurants  when I didn’t ask for tapwater quickly enough. I drink it in hotel  bedrooms. I have bought a refreshing bottle on hot sticky days. So who am I to question people’s understandable wish to stay hydrated in our increasingly uncomfortable cities?

But, unlike the water industry spokesman, as I strive to buy and drink as little bottled water as possible, and refill as often as possible, I do see a very “serious issue” and many pressing environmental reasons to produce less of it. Water is scarce. Using more water to manufacture plastic bottles, which also come with a  heavy CO2 output, particularly when many are not reused, and are not even recycled, simply has to be wrong, particularly when there is an alternative. (See below for notes on this.)

Is drinking water when you are away from home such a problem? (I accept that tourists have a difficulty here.) Many offices, places of work and public places already offer free, and perfectly palatable water. And is it is such a  burden to fill up a plastic bottle from your own tap at  home and take it with you?

Will this campaign catch on? It is far too early to say. The student life is of necessity very short, and those votes could well be reversed by a completely new body of students, seduced by the advertising of a very powerful industry, in three years time.

On the other hand this is a body of young adults at the start of their water-buying lives, being offered a realistic alternative to a product which some campaigners claim to be 2000 times more expensive than the entirely safe and drinkable water that comes out of most taps.  Are these people with enquiring minds, the opinion leaders of the future, the first siginificant body of opinion to see  through the flimsy justification for drinking bottled water?

Industry analyst Eric Meliton believe the bottling industry may be worried about losing brand loyalty from students.  “If they lose that access, yeah, you would see a big dropoff on that demographic.”

Internet and social media could help other university campuses replicate and take up this campaign. To maintain the H2O metaphor, don’t expect to see rivers of anti-bottled water opinion in spate just yet.  But it could just be that we are living through that barely perceptible turning of  tide.

in 2006 The Pacific Institute estimated that producing the plastic bottles for America’s 31.2 billion litre bottled water consumption required the equivalent of more than 17 million barrels of oil, not including the energy for transportation. It took 3 litres of water to produce 1 litre of bottled water. The manufacture of every ton of PET (plastic) produces around 3 tons of carbon dioxide (CO2). Bottling water thus created more than 2.5 million tons of CO2 in 2006.

More energy is needed to fill the bottles with water at the factory, move it by truck, train, ship, or air freight to the user, cool it in grocery stores or home refrigerators, and recover, recycle, or throw away the empty bottles. The Pacific Institute estimates that the total amount of energy embedded in our use of bottled water can be as high as the equivalent of filling a plastic bottle one quarter full with oil.

The Pacific Institute  says this about itself – “is one of the world’s leading independent non-profits, conducting research and advocacy on the related and pressing issues of environmental degradation, poverty, and political conflict.”