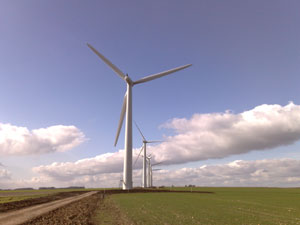 Energy minister John Hayes’ “enough is enough” remarks about  onshore wind farms, where he spoke of a countryside “peppered” with turbines, may have been spun by the Daily Mail and Daily Telegraph this morning, and by implication by the BBC, which seems to be simply repeating what it read in the newspapers.

Most busy listeners, or readers, will still have to take what they heard and read at face value, particularly from the BBC. So what about that countryside “peppered” with turbines? Over the weekend we took a 180 mile trip to Carmarthenshire from near Aylesbury in Bucks. That’s the very inexact equivalent, in driving terms, of the transect made in scientific observation, where the observer walks in a straight line – say 1 km – and notes down every bird he or she sees within 15 m or so of the path.

In the course of the trip I saw just two very obvious windfarms. One is just off the A420, between Oxford and Swindon. The other is in South Wales on the hills 6 miles north-east of Bridgend. There are a few more, again seen from the M4, turbines close to the steelworks near Newport. I recall seeing several more, individual turbines, around industrial areas but I can’t be sure where. Port Talbot? Or Newport? No more than six.

I can’t be certain I didn’t miss other windfarms, but I’m interested in wind energy and tend to pick them up.

That’s the turbine-festooned countryside through which we drove. It looked much the same on the way back, when I was looking at things from a different angle. But no more obvious turbines.

What of the Westmill Co-op windfarm we saw near Swindon? This indeed is very striking, five turbines on 49 metres high towers, swishing away in a brisk north-easterly last weekend. The local community doesn’t mind this one, because it actually owns it. The scheme produces pollution-free electricity for 2,500 average homes.

An ICM poll in October 2012 showed 49% of people would support a wind turbine being erected within two miles of their home, with 22% against. But if the project were community-owned, support rose to 68% and opposition fell to 7%.

Another October 2012 YouGov survey, commissioned by the Sunday Times, found that 69% of the British public want current level of wind energy increased or maintained. The survey also shows that wind energy has much greater public support than nuclear power and fossil fuels.

Only 40% of British people want more nuclear. The only source of energy more popular than wind was solar power, with 72% in favour. Most of the figures tally broadly with those revealed by the same survey carried out a year ago, showing a consistent level of support for renewables.

Those 20 wind turbines I saw from the M4 motorway in Wales are the Taff Ely Wind Farm, owned and operated by Npower Rnewables.. They are certainly conspicuous, but don’t seem to be close to very many people. So sound wouldn’t appear to be much of an issue here, even if  turbines do produce much intrusive sound, which is debatable.

Opponents of onshore wind don’t seem to make the point – unless I haven’t heard it – that turbines can go down as well as up. If, 20 years from now, the next generation of nuclear power stations were built and generating, we might consider taking down turbines which by then would’ve had a good working life, if that’s what local people want.

Then again, if the national mood is still as those polls above suggest, they might prefer to replace them with turbines that are bigger, quieter, more efficient and more productive. Why are we so deeply exercised (as the Mail and Telegraph seem to think) about an action that is so easily reversible?

Compare that to a change that cannot be so easily reversed. If the disease that has just been detected in ash trees in East Anglia (and surely government ministers have a responsibility here) takes hold, the countryside will be very different place before long. And that’s something that would take much longer to repair, if it ever can be.

Another Conservative MP, commenting on BBC Radio 5 this morning, agreed with what Mr Hayes is supposed to have said, saying his renewable power  option was nuclear energy. But nuclear is at least 10 years off even if we started building tomorrow. That’s a big time gap to fill. It seems that some politicians don’t want to fill it.