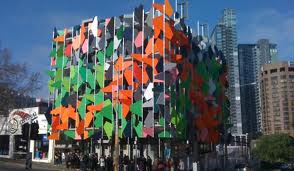 There are several examples of office buildings, either under construction or complete, with their own power-generating plants, built in such an energy-efficient way that they will send more power back to the electricuty grid than they consume.

The flamboyant (at least in its colourful cladding) Pixel Building in Melbourne, Australia, would appear to be the best example of all. It is certainly the most visually striking.

Architects and developers will have good budgetary (Co2 neutral buildings cost more to build than standard offices) and timescale reasons for not striving for such high energy–efficiency ratings just yet, but with buildings as one of the biggest producers of CO2, alongside transport, perhaps we should be paying more attention a number of very good examples worth emulating.

The Pixel, designed by architects Studio 505, in conjunction with sustainability consultants Umow Lai was recently completed, to a commission by Grocon, an Australian construction company.  It stands on a tiny parcel of land on Grocon’s Carlton Brewery redevelopment site.

There’s only one really international green building rating system, the U.S.-based LEED (Leadership in Energy and Environmental Design), developed by the U.S. Green Building Council. Under LEED, Pixel receives a perfect Green Star score of 100 points, with an additional 5 points for innovation

Not only will the power it generates from its rooftop make it carbon neutral in its everyday running, it will also offset (Grocon doesn’t say how long this will take) all the energy used in making the building materials and used in the construction period. The construction phase of building is a big CO2 generator. Concrete is a prime contributor, with up to 70% of the embodied energy during standard construction attributable to it.

The complex multi coloured façade is made up of shading panels cut from sheets of recycled aluminium. They are designed to admit maximum daylight, create shade and control glare and overheating.  They also create a memorable image for the building. Studio505 directors Dylan Brady and Dirk Zimmermann said Pixel was based on “aesthetics and science.”

The building includes a long list of energy-saving devices and measures. Lights are programmed to switch off when they aren’t needed. Windows are set to open at night to let air flow through the offices to keep the building cool, reducing the need for traditional air conditioning. During the day fresh air will be distributed through an individual control at each work station. Meters will monitor energy and water use, so adjustments can be made.

The roof will be planted with native grasses to harvest and filter water, with reed-bed ledges around each of the four storeys to filter grey water – water which has not been contaminated, from showers and wash basins. This water can be used in toilets and in the landscape irrigation. Vacuum toilets require half a litre per flush, compared to the normal three to six litres. This water strategy means Pixel could become completely water self-sufficient.

On the roof are both fixed and sun-tracking photovoltaic panels, which can be moved to face the optimal point in the sky, increasing the power output by up to 40%, together with three vertical axis wind turbines. These sytems generate more power than the building uses, with the surplus electricity fed back into the grid. Additional features which gained extra points for the building include reduced car parking, a vacuum toilet system and an anaerobic digestion system.

Shane Esmore, head of sustainability at Umow Lai, said: “Pixel has outscored the previous highest performing LEED building by 10 points. The project demonstrates how excellence and innovation can push the boundaries of sustainable design, and while it may be only a small building, its impact will be felt on the design of other office buildings around the world.”

One place where the building, or at least the energy saving processes built into it, might be replicated is China.  The People’s Republic is showing a lot of interest in green design, and designers and architects with demonstration properties on the ground stand to benefit.