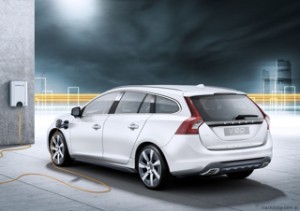 Volvo have come up with a car that could please three separate  eco–concerned  constituencies of drivers at once.

On deep green Level I,  the V60 Plug-in Hybrid (in showrooms in 2012)  is a pure electric car.  This week, working mainly from home, I  could have plugged it into the mains  and run it on electricity alone. The battery would give me about 30 miles range, enough  for the limited driving to and from the station and our nearest town  and sundry errands I’ve been running.

Come next Saturday, when we’re off to the theatre in Stratford-upon-Avon, I need the next level up, the default diesel Hybrid mode, That would give me plenty of range, and low emissions — 49g/km (half the level  that exempts you from the London congestion charge) and the equivalent diesel consumption of 150 mpg – yes, 150 miles per gallon.

Now I’m not planning such a trip just now,  but many would relish the prospect of  the car’s third level drive mode — ‘Power’ , and in the sense Top Gear readers understand it, but with a bit more fuel economy – perhaps for a  fast dash  down to Lands End,  as my children did last week.

There is wide appeal here. You can be as electric as you like running those short errands,  and doubling back home because you forgot something  with a clear conscience.  Of course the  electricity  may still come from a  CO2- producing source,  although increasingly it needn’t.  But even then it produces far less carbon than a petrol or diesel car.

Hybrid mode takes away, at a stroke, range anxiety. You  have complete  conventional fuel backup  security,  with high performance  and an enormous range.

Peter Mertens, Volvo’s Senior Vice President Research and Development said:  “In order to get the true car enthusiasts to think green, you have to offer the opportunity to drive with low carbon dioxide emissions without taking away the adrenalin rush that promotes genuine driving pleasure.”

Volvo want to make their cars carbon free by 2020.  As the first generation of all-electric vehicles (Volvo is bringing out their version, the V30, in 2012),  goes through what could still be, commercially speaking, a few difficult years,  they’ve come up with a very interesting  interim compromise.