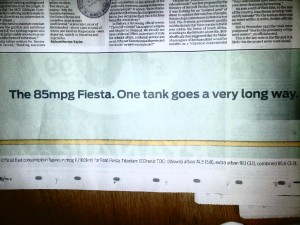 Tanks, but no tanks. Is the fuel economy message finally getting through.

Are car manufacturers, or more to the point the copywriters who write their adverts, finally getting the message about fuel economy and how important a selling point it should be?

With petrol prices running at record highs, and panic at the pumps only a union leader’s ultimatum (or Cabinet minister’s misdirected warning) away, you might think a vehicle’s mpg figures should be the first point to be made in any car advert these days.

As I have written before, you can be the biggest climate change-denier on wheels and can still see the point of driving a car that requires you to visit the petrol pump far less often than (assuming you drive a conventionally-fuelled model) than you do at present. It will save you piles of money, reduce our need for imported oil and possibly spare you having to join one of those frustrating queues the next time panic buying breaks out.

Recently I began to notice car adverts that promote a vehicle’s green credentials in big bold type, rather than the eye-straining small print at the bottom of the page.

Take the advert for the new Fiat Panda. It’s not so surprising that a small and compact car should be economical as well, but at last they are making a prominent point of its “fewer emissions, fewer trips to the pump and no road tax.” In medium-sized print they proclaim a “combined” range of between 54.3 and 72.4 mpg, with a figure of 95 g per kilometre for the version that does 72.4. (Even drivers who have no concern about Co2 and its effect on the climate, will care that cars emitting less than 100 g/km qualify for free road tax and are London Congestion charge exempt.)

Toyota not quite so specific with their advert for their new iQ mode, with a rather unimaginative “There’s more to a Toyota” legend above the new model, pictured in shiny, silver, side-on profile. However there’s a figure of 64.2 mpg in fairly big  type below, and the enticing “£0 road tax” tempter – its emissions are 99g/km, just under the crucial 100 g per kilometre figure.

That Volvo is promoting fuel economy is not a surprise. It has a general ad running which claims “up to 50.4 mpg” for its beefy XC60 and XC70 models, which is really quite modest fuel economy compared to some of its models, which return over 70 mpg.

The biggest surprise is Ford, until now a manufacturer we tended to associate with family friendliness rather planet-saving qualities.But it is advertising a car green enough for even the most fervent eco-warrior so stop and consider buying. Listen to this: “The 85 mpg Fiesta. One tank goes a very long way.”

The accompanying legend reads “795 miles on one tank and just 87 g per kilometre CO2 with Auto Start-Stop.”

Admittedly, you have to buy the more expensive Titanium ECOnetic TDCi to achieve that figure (£16,195), but they couldn’t be less equivocal in this ad. This could easily be a message aimed at the serious petrol head, who just doesnt want to waste all that time at the pump. No mention of climate change, or roadside pollution, or reducing petrol imports from volatile regions, but then there’s no need to. All those benefits flow from the fact that the Ford Fiesta Titanium ECOnetic TDCi uses less fuel.

There are still plenty of room for copywriting U-turns, back to the days when the capacity of the boot, the leather trim on the steering wheel and the shine on the chrome hubcaps came first. That could happen when the price of petrol falls significantly. And we know that is not going to happen?

So are we in the first gear of a new age in sensible car advertising?