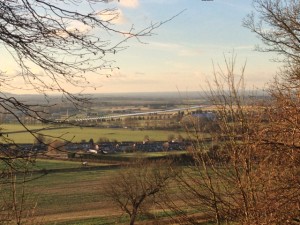 A line of solar panels at Westcott Business Park in Buckinghamshire

I bet Tim Yeo’s List of personal targets for this year did not include briefly trending third on the UK twitter list, just behind Romeo Beckham. And for sound and excellent reasons.

[By 2pm he was top trend, ahead of Master Beckham.]

Yeo is a significant Conservative MP, Chair of the Energy and Climate Change Committee, and today he announced he would be tabling an amendment to the government’s electricity market bill to impose a 2030 decarbonization target on industry.

In a speech at Bloomberg’s London office today (Tuesday, December 18, 2012), the MP said the target is needed to give investors the security they need to fund low-carbon power generation. His intervention comes just a few days after the UK chancellor George Osborne, presumably with the prime minister’s full agreement, announced what many regard as a shortsighted and possibly dangerous (in that, if it were to be pursued in its most ambitious form, experts say the UK would not be able to meet its climate change targets) “dash for gas” policy. In his speech Yeo says the “dash for gas” would be a gamble.

As for the wisdom of investing in green energy, this is what the BBC’s Dragon’s Den entrepreneur Deborah Meaden has to say. (She fronts a video Friends of the Earth released to support its Clean British Energy campaign.)

Q. “Why do you think renewable energy is good for business?
A. “I wouldn’t sit in a boardroom and decide to do something that was completely unsustainable and would kill my business in the future – that would be loopy. But that’s exactly what we are doing if we don’t invest in renewables. We’re making a decision to allow a resource to run out and to damage the planet.”

Q. “What would encourage more people to invest in renewable energy?”

A. “Some people think renewable energy doesn’t work. Well it does work. It’s an investment of the future – while others are dying this is an industry in its infancy. It is a viable long-term investment. Those people who get it at ground level – they’re going to be the winners.”

In his Bloomberg speech Tim Yeo said, after extoling the advances Great Britain made in energy in the 20th century: “Exciting new energy technologies could bring equally radical changes to the way we power our homes and businesses. But instead of being out in front again, leading the green industrial revolution, Britain risks being left behind.

Our competitors… China, Japan, Germany and the US are pushing ahead on clean new technologies.  [Yet] only last month, the UK fell from fifth to sixth place in the renewable energy attractiveness rankings globally. China is at the top and shows no signs of slowing down its low-carbon investment.

“To put Britain at the forefront of this new industrial evolution however, the [electricity market] Bill should be more ambitious and set a clean energy target to cut dependence on fossil fuels for electricity generation by 2030 – as the Government’s own independent climate advisors have recommended.

“Financial support for low-carbon technologies is needed to accelerate their development and deliver the economies of scale that will bring costs down. What many forget is that these costs will not continue indefinitely. Giving these technologies a short-term boost will soon lead to costs coming down.

“As chairman of the Commons Energy Committee, I think the choice facing
Britain is clear. We can embrace the technology of the future, set a target to reduce our present heavy dependence on fossil fuels and upgrade our electricity system. Or we can cling to the combustion-based technologies of the past, gamble the future on assumptions about the availability of abundant cheap gas and slow down the process of decarbonising our economy.”

You can, of course, totally disregard what Yeo says because he personally benefits from green technology, through his chairmanship or directorship of three green companies – according to Guido Fawkes in http://order-order.com. You might also argue that he knows at first hand what the enormous potential for development in this area is.