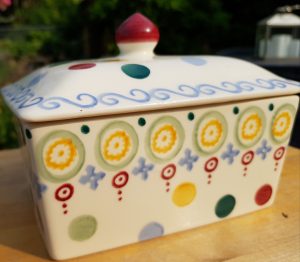 Butter better for breakfast – or margarine? Photo: the author

I wrote the following article in 2016. Since then I came across this study – “Comparative life cycle assessment of margarine and butter consumed in the UK, Germany and France”. It dates from 2010, but was published earlier in 2018.

It concludes that margarine products analysed in this study, in the UK, Germany and France, are “ more environmentally favourable than the butter products.”   It appears to confirm the findings of the earlier Carbon Trust  study.

It notes that the findings are “likely to be of general relevance for other Western European countries where similar margarine and butter production systems are found.“ The study is here.

As consumers, most of us are able to reduce our carbon footprint.

We could, for example, use our (fossil-fuel powered) cars less. Not giving them up totally, but for, say, one or two days a week and using the bus instead.

One thing that is harder to give up, or even to abstain from for short periods, is a smartphone. There’s no bus or bicycle switch equivalent. No phone, and we are out of touch. And our social life falls apart. Or so it might seem.

What about the things that we eat or drink?  Abstaining from wine or beer occasionally doesn’t really count, because we don’t actually need them every day.

But what about butter? Something many of us spread on our toast and sandwiches every single day. How hard would it be to switch to margarine? Significant savings could be made to our carbon footprint, and in the amount of land and water used in its production. And if complete withdrawal is too much of a gesture for the planet, what about one day a week? Scale that up across the country, and it still amounts to big savings.

The Carbon Trust is behind this scenario. “Experts” you meet in the pub don’t pack enough credibility in their arguments to persuade you one way or another. The trust’s report, Comparing the Environmental Impact of Flora and Butter, although it appears to promote one particular brand, is based on serious research. (The trust describes itself as “independent experts on carbon reduction and resource efficiency…with a mission to accelerate the move to a sustainable, low carbon economy.”)

The figures are compelling.

The trust says margarine has one tenth of the CO2e (Carbon dioxide equivalent) emissions of butter, one seventh of the land use and half the water use. Methane (25 times more powerful a greenhouse gas than carbon dioxide) accounts for 37.6% of butter’s carbon footprint, while virtually no methane (<1%) is emitted in the production of margarine.

It is the same for water use. Butter uses 1572 litres per 500 grammes (lt/500g); Flora Freedom uses 659 l. The land footprint (bear in mind the obvious fact that butter comes from cows, and margarine in large part from fields of oil seed) is 8.5 square metres per 500 grammes (m2/500g) for butter; 1.02 m2/500g for Flora Freedom. Big savings apply too to (also quoted in the report) Flora Original (Core) and “Margarine (generic)”, but the most significant savings are made with Flora Freedom.

Under all headings spreadable butter is lighter on the environment than real butter, but still makes a significantly bigger impact than margarine.

Looking at the “total annual UK sustainability impacts” of spreads, the report states that the butter and margarine we currently consume has an annual  greenhouse gas footprint of 1.4 million tonnes of CO2 (t CO2e).

One word of caution. The dairy industry is committed to reducing its environmental impact by 2025, by which time dairy production will be more efficient. However even when these changes are factored in, margarine still comes in as far less demanding in terms of land and water use and in greenhouse gas emissions compared with butter.