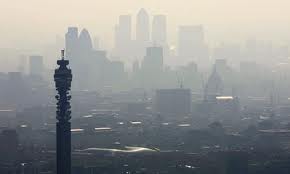 This week the Guardian newspaper published a disturbing story about air-quality in London and other urban areas. There have been a lot of still, quiet weather days in London this month (March 2013) and that contributes to a buildup of airborne pollution.

Much of that comes from diesel engines, in cars, taxis and commercial vehicles. Unlike climate change, which a significant minority, including politicians, still dispute, this is an issue about which there can be no debate, no fudge. Air pollution can be measured, and its health effects, particularly on the young, are known.

Here is the link.

I wrote the following two years ago, after I attended a presentation by Volvo on its initiative to bring in some kind of air quality monitoring, and a smart phone app which would help potential buyers decide which was the cleanest car, across the range of pollutants, not just Co2.

Indeed it seems things have got worse, with the government paying insufficient regard to frequent breaches of air quality.

This is the piece I wrote in the spring of 2011, with a few modifications to update it.

I live close to a pollution hotspot, and, like many otherwise well-intentioned people I know, I add to that pollution.

I don’t drop litter, or pitch trolleys into the canal, or do things I could easily stop. This is everyday, going-about-normal-life pollution  I’m talking about. It comes out of the exhaust pipe of my (petrol) car.

The 600m stretch of the A41 Tring Road in Aylesbury is officially one of the 250 most polluted roads in Britain, declared an Air Quality Management Area (AQMA) in 2005. It’s lined with 110 houses, and the people who live in them face unacceptably high levels of nitrous oxide emissions (NOx) from slow-moving or queueing traffic, particularly at busy times morning and afternoon. (Extensive roadworks are now taking place – March 2013 – to improve traffic flow and alleviate the situation. See below,)

In 2010 the Environmental Audit Committee predicted 50,000 premature deaths due to poor air quality, linked to fossil fuel combustion. NOx, Hydrocarbons and Particulates are key contributors, particularly in urban areas, and are one of the main reasons why the UK suffers from one of the highest recorded asthma rates in the world.

The primary source of NOx is motorised road transport, specifically cars and freight vehicles. Exposure to NOx can decreases lung function and increase the risk of respiratory problems such as acute bronchitis. Children and the elderly are particularly vulnerable.

In March 2011 a European Commission-funded study – the Aphekom project  – concluded: “In 10 European cities we have estimated that living near busy roads could be responsible for 15 percent of asthma in children and possibly for similar or higher percentages of other common chronic diseases in adults 65 and over, such as coronary heart disease and chronic obstructive pulmonary disease.

Councils in the UK must monitor air quality to ensure it remains within national targets. Where it does not, they must designate Air Quality Management Areas, indicating that the council recognises that air quality is poor within the areas, and that positive steps need to be taken to reduce these levels.

In Aylesbury, having identified the problem (and there are now two more AQMAs in the town) the local authority drew up an Local Air Quality Action Plan, to improve air quality and reduce pollution through measures such as better traffic management.

Researching this blog, I found the latest entries to the AQMA list were in Halton Borough Council, where  NOx levels on two streets are now deemed to be too high. I could find no reference to roads being taken off the list, although that doesn’t mean there aren’t any. However progress is likely to be slow, with some solutions quite beyond the powers of the local authority.

In 2010 Volvo launched an initiative aimed at providing motorists with a broad range of emissions information when they buy their next car – irrespective of marque. It wants the Government to launch an automotive air pollutants environmental label to sit alongside the already established Co2 label displayed in new and used car showrooms.

Volvo believes it’s time to educate drivers about the complete emissions picture, rather than just Co2 in isolation. The company launched a smart phone app, which gives drivers emissions information when they buy a car.

At the launch one speaker did warn that, having finally grasped the importance of Co2, the public would find it difficult to get its head around a second raft of pollutants.(Almost 3 years on, this appears to be the case.)

While traffic levels rise remorselessly, cars have become cleaner since the early 1990s, and this has had an effect on air pollution. The NOx produced by the average petrol car has fallen by 95%, since the introduction of catalytic converters. Some diesel cars produce more NOx than petrol cars, although here too engines are becoming cleaner.

it would be unrealistic to see tailpipe-free electric car as the answer in the UK for some time. (This is even more true, in 2013.) There are many more charging stations in the UK, but, it seems, not the electric cars to use them.

The short term answer must be to reduce diesel emissions still further. Banning diesel vehicles from busy urban roads altogether would halt half the taxis in Britain, or more.

Action is now being taken to improve traffic flows. As part of the plans to build the Arla factory on the A41 just south of the town,  local Liberal Democrats met the company to discuss possible amelioration measures.

They pointed out the pinch points on the town’s road network, where there would have to be improvements for the dairy scheme to work. Arla accommodated those concerns and worked the politicians’ suggestions into their planning application.

Two roundabouts on the  Tring Road, where air quality is poor, are now being replaced by traffic lights.  The system for controlling the frequency of light changes is more flexible than that used at older junctions, and this should improve traffic flow, particularly in the rush hour.