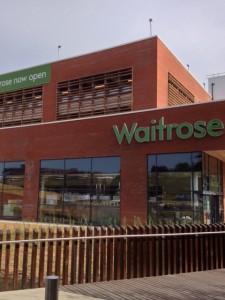 A new Waitrose opened in our local town of August 8, and we shall be going there in future for all our fish. I don’t mean to make light of the efforts the other local supermarkets have put into selling fish from sustainable sources, but Waitrose has made a commitment that, by the end of 2016, all the seafood it sells will be certified as sustainable, approved independently, in this case by the Marine Stewardship Council (MSC).

That’s good enough for us. I hope the others will make similar commitments as soon as they can.

Supermarkets have come far in the 2000s, urged on by pressure groups and campaigning individuals, from a point in the mid to late 90s when nobody had much idea where the fish on a plate came from, how it was caught and whether any regard was taken to maintain a population at which level it could be safely fished into the future. One of the bodies promoting the sale of sustainable fish in restaurants is Fish2fork.

It isn’t as if we didn’t know the dangers. We’ve had the awful precedent of the totally depleted Grand Banks fishery of Eastern Canada burning our conscience for many years.

Let’s not for a minute think we’ve even turned a corner. The United Nations said in its 2012 report State of World Fisheries and Aquaculture that 85 percent of the world’s fish stocks are fully or over exploited, depleted or recovering from depletion.

This means that many of the seafood species currently on the shelves of UK supermarkets still come from over-fished stocks or are caught using methods that are very damaging to marine environments.

But we do seem to be making a promising start. Much of the fish we eat comes from supermarkets. Waitrose sells 11% of the fish we buy. The supermarket was one of the early adopters in the policy of moving to sustainable fish. In 1998 it launched its “Responsible Fish Sourcing Policy”.

It’s been steadily increasing the amount of sustainable (wild) fish it has sold, along with its competitors. That is fish certified by the MSC. The Aquaculture Stewardship Council (ASC) does the certification for farmed fish.

Among the other supermarkets, Sainsbury’s launched its Switch the Fish campaign recently, promoting coley, pouting, megrim and mackerel in place of the usual cod, tuna, salmon, haddock or prawns. Morrisons pledged to sell  on its counters only fresh fish that has never been frozen and that has come from “sustainable waters.”

Waitrose moved ahead of them with its July 2013 announcement, promising to sell only certified fish by the end of 2016. That dictum applies to all products, including the seafood counter, sandwiches, frozen, tins and ready meals. It is the first supermarket to make such a pledge. (It should, incidentally, end the confusion over claims on packets, with labels promising “sustainable”, “responsibly farmed” and “responsibly sourced”. The independent MSC certification is the best there is.)

The benefits of this policy will flow much sooner than that. In 2013 Waitrose has already declared that the cod and haddock it sells comes from only sustainable sources. And that applies across all product ranges, including fresh, smoked and breaded cod and haddock.

This is significant because 80 per cent of the fish we buy in supermarkets is from five species – cod, haddock, salmon, prawns and tuna.

Waitrose points out that the actual choice is much wider, with more than 200 edible species available from waters around the UK.

Some of the already popular species on fishmongers’ slabs in supermarkets include coley, one of the least expensive fish in the cod family, gurnard and flounder. More abundant mackerel and sardines are cheaper than the top five species. The Marine Conservation Society commended Waitrose for being the UK retailer to stock the largest number of fish from its recommended ‘Fish to Eat’ list.

As for farmed fish, all the salmon sold in Waitrose comes from the Select Farm scheme. It notes that these farms are sited in “clean, oceanic waters with strong tidal flows [to] keep the seabed clean. Select Farm sites [are] situated away from mouths of salmon rivers, to reduce interaction between wild and farmed salmon.”

British consumers, according to polling, might be willing to pay more for their fish, if it were caught in a more sustainable way. In 2013 food research institute Nofima found that British shoppers were willing to pay 22% more for frozen cod and haddock that is labelled “line-caught”. The researchers said this was due to the higher quality of line-caught fish, and the perception that it was more environmentally friendly.

There is much still to be done.  For a start the World Wide Fund for Nature (WWF) has called on supermarkets to ensure that their seafood procurement policies must be implemented across the full range of seafood they sell, from fresh cod fillets to tuna sandwiches.