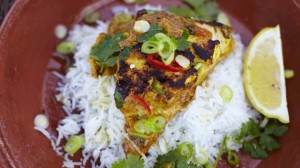 This month (June) Sainsbury’s launched its ‘Switch the Fish’  campaign. Customers who ask for cod, tuna  and skate are offered, in addition,  a free portion of some of the unfashionable species that are being thrown back because they have little market value but are sustainable: fish like coley, megrim, hake, pouting, mackerel and rainbow trout. They account for the greater part of the jettisoned fish, in fact.

Chefs, too, have an important part to play.  Jamie Oliver  is a big, celebrity, player in the campaign, and has showed how to cook coley, live, on a on trawler in Channel 4’s Jamie’s Fish Suppers http://www.jamieoliver.com/news/jamie-s-fish-suppers.

Now an initiative at the Seafood Training School at Billingsgate, site of Britain’s most famous fish market,  seeks to encourage chefs to be more adventurous in what they offer. Chefs attending a course, on July 13, will be shown how to prepare and cook species such as dab and pouting and other fish that are usually discarded. The course is part of Defra’s Fishing for the Markets project which is looking at how sustainability of fisheries can be improved by persuading the public to switch to eating less well-known species  –   others potentially on the menu include red gurnard, grey gurnard, dragonet, and cuttlefish.

Adam Whittle, deputy director of the School, told Fish2Fork.com, the fish resturant guide for people who want to eat fish and seafood sustainably: “These are beautiful and tasty fish. It’s up to chefs to come up with ideas on how these are introduced to people without putting them off.”

Looking only at the  “unfashionable” species, they made up 54 per cent of the 24,500 tonnes of fish that were discarded in 2008. Pouting, also known as dib, was among the most discarded species of all, with 3,214 tonnes dumped.