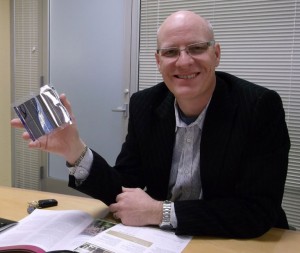 It’s hard to compete with the Chinese in making the current generation of solar panels, with the price of silicon panels dropping fast. There are few if any manufacturers in the UK, and in the US the Tea Party party ridiculed the Obama administration for so conspicuously supporting Solyndra, the solar panel manufacturer that went into liquidation.

There is another way. Small start-ups are working hard to improve the efficiency of the solar panels we are now so familiar with on household rooftops, and to find new applications for solar energy.

One of the most promising innovators is Alta Devices, based in California, which has just announced a thin, light solar panel which soldiers on active duty will carry in their backpacks to take the place of the heavy batteries they lug around to power their systems. This charging mat is slightly larger than a sheet of paper and weighs just 114 grams.

Although this is an important technological advance from a company named by GigaOM  as one of the 13 key start-ups to look for in 2013,  it will not impact too much on our everyday lives, unless there are soldiers out in the streets defending us.

However potentially lucrative contracts with the military will help the company develop, and apply what is still a prohibitively expensive technology in devices that the ordinary consumer can afford. And we could see it soon in something which would be far more use to most of us, a cover that recharges an iPad.

There are a number of solar iPad accessories on the market, but in the main they don’t generate much power, are heavy to carry and quite thick. This device, which could follow the soldiers’ charger into production by the end of 2013, would be able to power an iPad, and, presumably other tablet devices, comfortably in direct sunshine, and even generate power indoors.

Alta’s thin and flexible solar cells have a light-conversion efficiency of 28.8%, which is considerably more powerful than other flexible solar cells. Chris Norris, the company’s CEO, said its iPad cover would be able to generate 10 watts of power in the full sun. “the same amount of power you get from [a plug in] the wall.”

He said that even the ambient light from windows and lamps would generate significant amounts of power, doing away with the need to plug the tablet in to be recharged.

Alta is looking at sites for a possible factory in the north-east of the USA. Once it begins manufacturing at scale, it would expects to reduce to the cost of its devices.

The company’s mobile power technology holds considerable promise. It could be used to provide power to anything that moves, can be carried, or worn. But those thin and efficient solar panels could have an even more valuable mainstream use.

They might, for example, be incorporated into solar shingles, or roof tiles. There has been a very low take up of these tiles so far. Alta’s cells could triple the power output of the standard solar shingles on the market. That opens up the exciting prospect of an ordinary house being able to generate more power than it uses.

An article on Alta in the MIT Technological Review