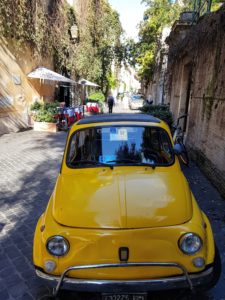 One of the most poignant places in Rome has nothing to do with imperial grandeur, or centuries of accumulated art and architecture. It’s where a doomed 25 year old lived his last six months. Standing in the room where John Keats died of TB in 1821 was intensely moving, while everyday life continued just outside on the Spanish Steps. Externally Keats-Shelley House is unchanged from when Keats moved here in vain hopes of a recovery, with so much more to say. But his reputation as a great poet was already made (the movie Bright Star is a good start). Everything in this small museum is in English, and there’s an excellent shop. The Landmark Trust rents out the apartment above.

The historic core of the building contains the library, exhibition space, and the apartment which Keats and the artist Joseph Severn rented, 1820-1821. There is a collection of paintings and portraits, busts and miniatures, relics and first editions on display, together with manuscripts and letters from the permanent collection.

Visiting may be difficult for some time; but there’s a 360° video tour through the House, narrated by Keats-Shelley200 Ambassador Sir Bob Geldof. Also on the website (www.keats-shelley-house.org) are readings of Keats’s and Shelley’s poems by various UK figures.

In recent years the house has made some outstanding acquisitions, including the earliest extant manuscript of Keats’s poem ‘In drear nighted December’; and a letter sent by Keats in June 1818 the day before he set out on a walking tour of Scotland.

As a British museum abroad, Keats-Shelley House receives no public funding from the UK; it relies on the generosity of supporters and on revenue from visitors.

The graves of Keats, Shelley, and others connected with them are in Rome’s Non-Catholic Cemetery, and may be visited.

My article on Rome.

There are many supportive events, available online.

Writ in Water is a new play  by Angus-Graham Campbell, commissioned by the BBC and produced by Wireless Theatre Co. in partnership with the Keats-Shelley Memorial Association, to mark the bicentenary (45 minutes). BBC Radio 4, BBC iPlayer.

On the 200th anniversary of Keats’s death his poem ‘Bright Star’, written for Fanny Brawne, was recited by a virtual Keats from the room where he died.

The project was commissioned by the Keats-Shelley Memorial Association from the Institute for Digital Archaeology in Oxford. The stream includes a preview of a Grecian Urn for the 21st century by artist Dan Baldwin, with readings by Scarlett Sabet and UK Poet Laureate and Keats-Shelley200 Ambassador  Simon Armitage, as well as the CGI Keats.

The Death of Keats is an immersive video story narrated by Bob Geldof (available on the House’s YouTube channel): this video story recounts, through readings of letters by John Keats and Joseph Severn, Keats’s final few months before his death (10 minutes).

The Tomb of the Poet: To mark the bicentenary the Museum of Rome in Trastevere created a video, ‘The Tomb of the Poet’ (in Italian). It recounts how important Rome was for areKeats and other artists and poets, who drew inspiration from the city’s cultural and spiritual heritage. Click here to watch the video on YouTube.