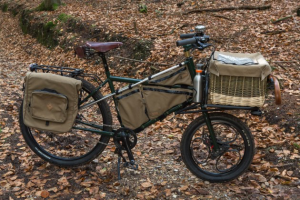 I once owned one of the original Moulton small-wheeled folding bikes. It was the only new bike I’ve ever had; all the others were second-hand – less likely to be stolen. I rode my Moulton to work in Leeds for several years and it never disappointed me.

I can imagine the owners of the Sven Cycles Forager feeling equally enthusiastic, although they probably won’t ride it to work. Unless, that is, they are restauranteurs who source their ingredients in the surrounding woods and countryside.

I remember thinking my Moulton was awfully expensive, but quickly realised you have to pay more for quality. It’s the same with the Forager, a collaboration between Sven Cycles, who make British handmade bicycles in Weymouth, Dorset, and Hugh Fearnley-Whittingstall, restauranteur and food campaigner. It was built for the purpose of being ridden into the woods and countryside to collect and carry wild food. On board is the equipment to serve up with some quite complicated cooking, if need be, out in the open air. It will cost £3900.

Sven Cycles founder Darron Sven Coppin came up with the idea of the Forager, and sent it to Hugh Fearnley-Whittingstall. The celebrity TV chef and broadcaster is a keen advocate of sustainable food, fishing and local ingredients. His River Cottage has evolved into a culinary school, and study centre for food sustainability.
To Coppin’s surprise, Fearnley-Whittingstall came back with an enthusiastic response. The two, along with River Cottage’s executive chef Gill Meller, sets to work designing a bike equipped with all the gatherer (but not hunter) would need for a trip into the wild.

The bike takes its inspiration from the go-anywhere spirit of the original Land Rover, married to good construction by craftsmen, and Fearnley-Whittingstall’s ethos of recycling and procuring locally.

The main engineering feature for its off-road, rough terrain roaming is the front shock-absorbing loopwheel, developed by a Nottinghamshire company. It uses uses three ovals rather than spokes as shock absorbers. The suspension above the rear wheel is more old-fashioned. It comes from a sprung Brooks leather saddle. A front dynamo hub powers a USB charger, and the lights. The frame is made from Reynolds tubing.

Sven, which launched in 2012, commissioned Leeds-based bag and accessories maker Restrap to provide bespoke baskets and panniers at the front, rear and in the centre of the frame. They are filled with locally produced cooking gear, a fold-up barbecue, pots and pans, plates and utensils, chopping board made from an old boat deck, and a mushroom knife.

The Forager, a rare amalgam of food, cycling, sustainability and design, will be on show at Bespoked, the UK Handmade Bicycle Show, April 15-17 in Bristol. It will then be officially launched at Fearnley-Whittingstal’s River Cottage May Food Fair. The broadcaster has already expressed his pleasure in the finished bike, saying it was a “a joy to ride.”